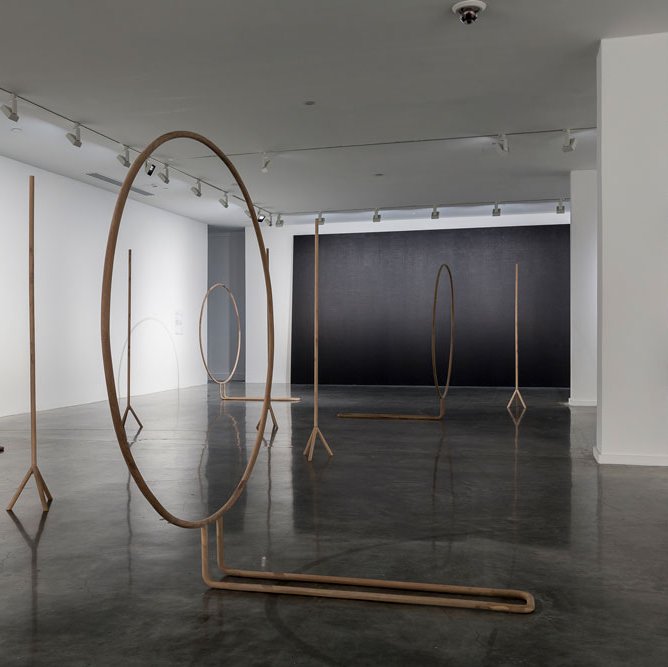 Maria Taniguchi’s diverse practice encompasses sculpture, painting, drawing, silkscreen, video and photography. Interested in exploring concepts of space and time, in 2008 Taniguchi initiated an ongoing series of works that take the form of large-format canvases covered in a meticulous arrangement of hand-painted bricks. The artist has referred to these labour-intensive, process-driven works as being the fundamental root of her artistic practice, which, at its core, explores the systems and structures of making art and the materiality and architecture of painting itself.

The methodical process of creating the brick paintings is an important objective of the work for Taniguchi; time and effort dedicated to the production of each artwork requiring discipline and a singular focus. When commencing a new painting, Taniguchi prepares the surface by stretching canvas onto a wooden board on the floor and priming it with a layer of grey paint. Drawing the outline of the pattern of bricks onto the monotone surface by hand, she painstakingly fills each rectangle with black acrylic paint. Despite the structural format of the grid and the mechanical process of production, the appearance of the paintings varies considerably from canvas to canvas, dependent on the ratio of paint and water the artist uses. Taniguchi has related the works to an external mechanisation of the body as well as a reference to the cells that make up a biological organism. Intimately connected to Taniguchi’s other works and to each other, the brick paintings represent a small part of the larger, more complete matrix of her practice.

The brick paintings, all untitled and unnumbered, are hybrid objects that the artist considers to be both paintings and sculptural forms. Taniguchi presents a large-scale brick painting at the Museum of Contemporary Art Australia, leaning the canvas against the wall of the gallery space rather than hanging it in a conventional manner. Alongside the painting Taniguchi exhibits a series of sculptural circles and rods made from Java Plum, a hardwood native to India and Southeast Asia. The ‘I’ and ‘O’ shapes create a physical intervention in the gallery space, interrupting the predictable trajectory of the viewer and subtly proposing an alternative experience.

Presentation at the 21st Biennale of Sydney was made possible with generous assistance from Mercedes Zobel; Silverlens Galleries, Manila; and the Australia-ASEAN Council of the Department of Foreign Affairs and Trade