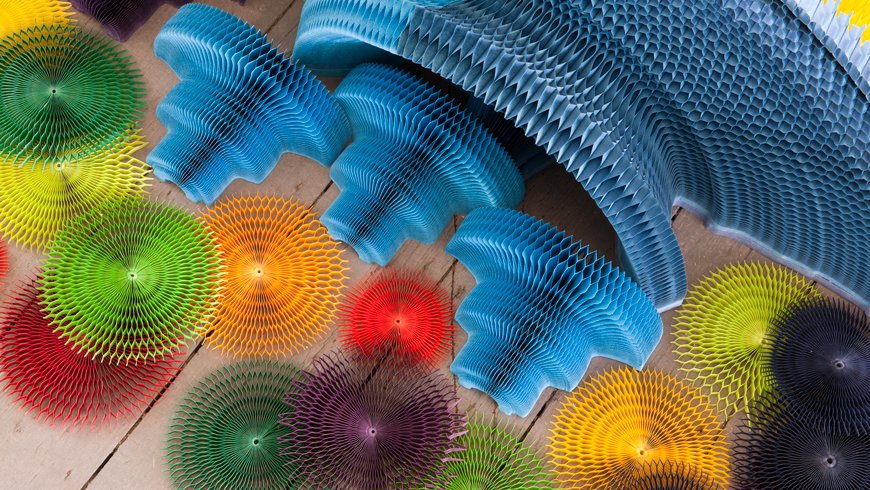 The 18th Biennale of Sydney, all our relations, was the first to be developed by a curatorial duo, Artistic Directors Catherine de Zegher and Gerald McMaster. De Zegher and McMaster proposed that an exhibition that could function as a collaboration between curators, artists and audience; a ‘collective composition’ that championed values of connectivity, conversation and compassion as models for being in the world. To this end, one of the criteria for participation was an interest in conversation and collaboration. Artists were also invited to consider the audience’s experience over time. Art became a way of activating a ‘relational field’ in which things and people could interact and create meaning together. The result was a Biennale rich with experiential and participatory artworks, performances and collaborations, such as the ephemeral installation The River, 2012, produced by Polish-born German artist Monika Grzymala and Euraba Artists and Papermakers from north-west New South Wales, one of ten collaboratively produced works. On Cockatoo Island, under the evocative subtitle ‘Stories, Senses and Spheres’, large-scale sculptures, immersive installations and sound works were featured, with artists such as Philip Beesley, Tiffany Singh, Imran Qureshi and Lyndal Jones creating work especially for the site. Carriageworks was a presenting partner for the first time, hosting the Australian premieres of En Atendant and Cesena by Anne Teresa De Keersmaeker’s dance ensemble Rosas, as well as an installation by Ann Veronica Janssens.

Catherine de Zegher and Gerald McMaster were the Artistic Directors of the 18th Biennale of Sydney. They collaborated at the Art Gallery of Ontario, Toronto, where they participated in the re-installation of the Gallery’s collection in the renovated museum building by Frank Gehry. De Zegher and McMaster led the reinstallation of the European and Canadian galleries respectively. They have also worked together on the exhibition Draw & Tell: Lines of Transformation by Norval Morrisseau/Copper Thunderbird (2001) at The Drawing Center in New York.

Catherine de Zegher is a curator and writer, and Visiting Curator, Tàpies Foundation, Barcelona. She was Guest Curator at Department of Drawings, Museum of Modern Art, New York, where she co-organised On Line: Drawing Through the Twentieth Century. De Zegher was Director of Exhibitions and Publications, Art Gallery of Ontario, Toronto and, for many years, was the Executive Director and Chief Curator of The Drawing Center, New York. Before working in North America, she was co-founder and Director of the Kanaal Art Foundation in Kortrijk, Belgium.

De Zegher is the editor of many books and curator of widely acclaimed exhibitions, including America: Bride of the Sun. 500 Years of Latin America and the Low Countries (1992) at the Royal Museum of Fine Art, Antwerp and Inside the Visible. An Elliptical Traverse of Twentieth-Century Art in, of, and from the Feminine (1994–96) at the Institute of Contemporary Art, Boston, Whitechapel Gallery, London and the Art Gallery of Western Australia, Perth. She has curated several award-winning exhibitions including Eva Hesse Drawing (2006), which received the Association of Art Museum Curators (AAMC) Award for excellence and 3 x Abstraction: New Methods of Drawing by Hilma af Klint, Emma Kunz, and Agnes Martin (2005), which received the Best Show AICA (International Association of Art Critics) Award 2005. In 1997, de Zegher was the Belgian Commissioner to the XLVII Venice Biennale.

Gerald McMaster is a curator, artist and writer, and since 2005 has been the Fredrik S. Eaton Curator, Canadian Art, Art Gallery of Ontario, Toronto, where he curated Inuit Modern: The Esther and Samuel Sarick Collection. He was also a member of the curatorial team for the 2010 Scotiabank Nuit Blanche in Toronto. At the Smithsonian’s National Museum of the American Indian, McMaster was the Director’s Special Assistant for Mall Exhibitions and Deputy Assistant Director for Cultural Resources. McMaster was also Curator, Canadian Museum of Civilization.

McMaster is the editor of a number of books, and in 1995 was the Canadian Commissioner to the XLVI Venice Biennale. He has curated many renowned exhibitions, including In the Shadow of the Sun (1988), Indigena (1992), Edward Poitras (1995) and Reservation X (1998). While at the Smithsonian he co-edited and co-curated First American Art: The Charles and Valerie Diker Collection of American Indian Art (2004), edited and curated New Tribe: New York (2005–06) and co-curated Remix: Multiple Modernities in a Post-Indian World (2007). 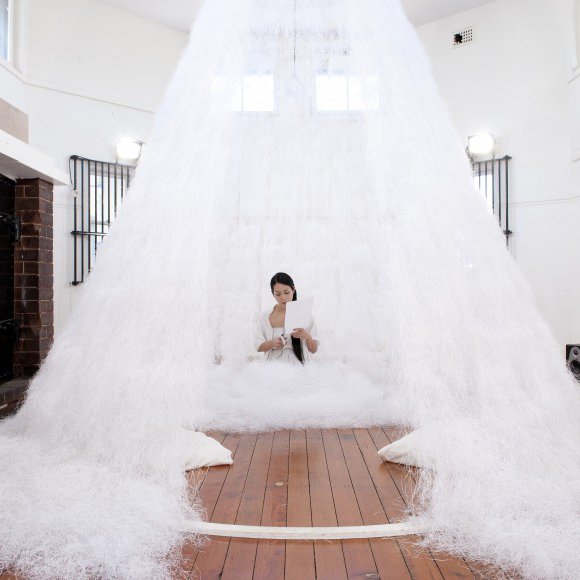 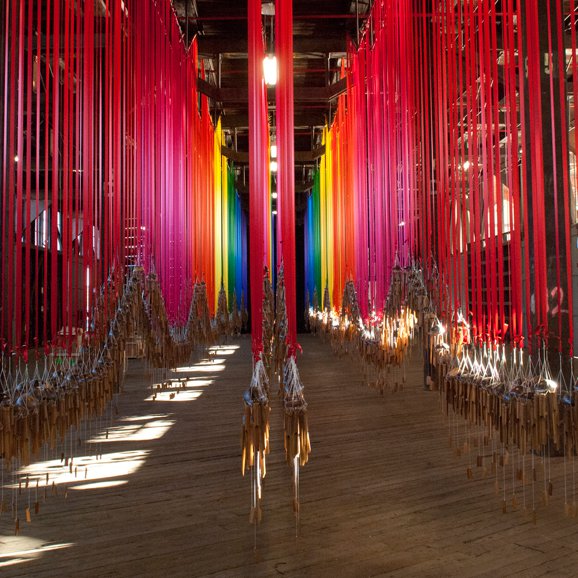 Tiffany Singh, Knock On The Sky Listen To The Sound, 2011. Installation view of the 18th Biennale of Sydney (2012) at Pier 2/3. Courtesy the artist. Photograph: Sebastian Kriete 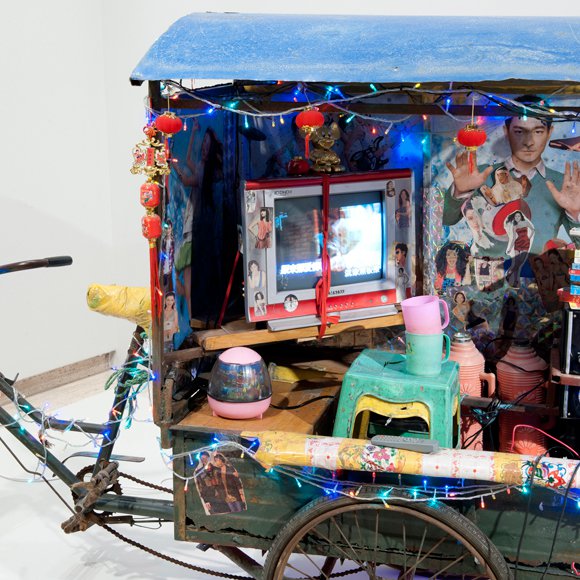 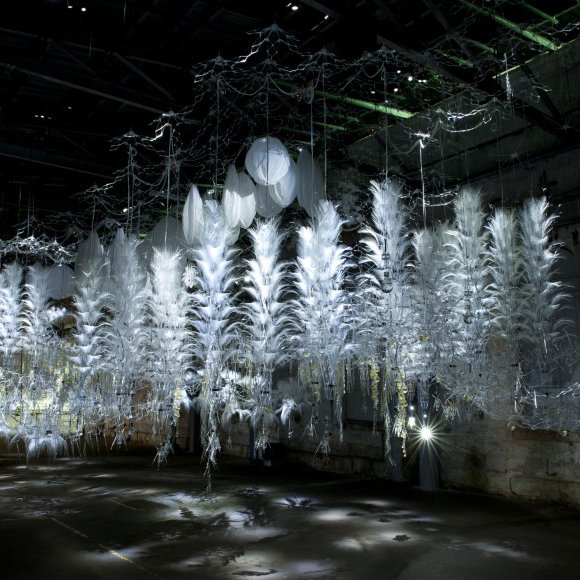 Highlights from the 18th Biennale of Sydney