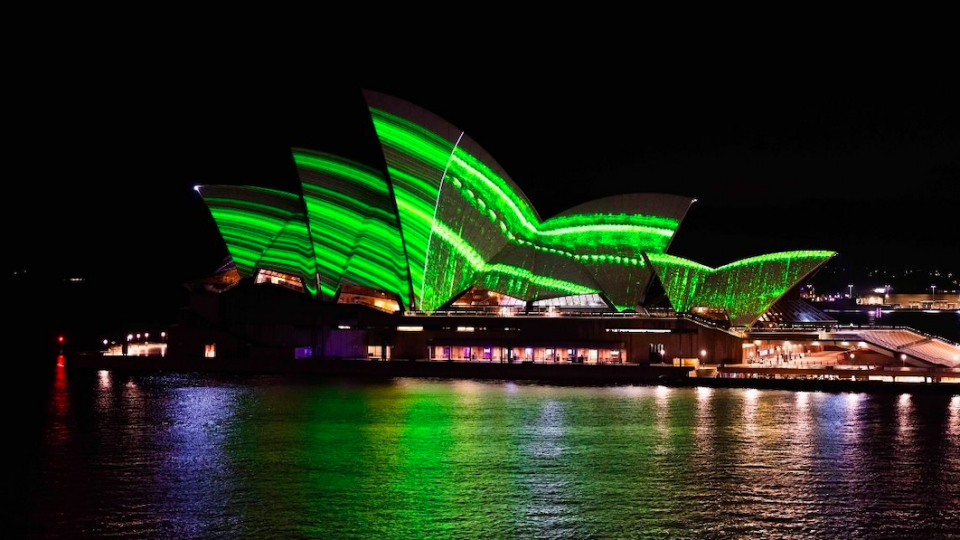 Image: The Great Animal Orchestra by Bernie Krause and the United Visual Artists projected on the Sydney Opera House, 2022. Presented by Fondation Cartier and the Biennale of Sydney. Photograph: Daniel Boud.

Sydney, Australia: Today, the Biennale of Sydney, and Fondation Cartier pour l’art contemporain announced that a site-specific version of The Great Animal Orchestra will be projected on the sails of the Sydney Opera House over three nights from 9 – 11 March, marking the countdown to the 23rd Biennale of Sydney, titled rīvus, opening to the public on 12 March 2022.

Created at the initiative of the Fondation Cartier pour l’art contemporain, the environmentally focused immersive installation will make its Australian premiere at the 23rd Biennale of Sydney, presented at the Stargazer Lawn, Barangaroo for the duration of the three-month exhibition from 12 March to 13 June 2022. Bookings are now open with free admission to experience The Great Animal Orchestra.

A special preview of the work will light up the sails over three evenings, 9 – 11 March 2022, 7.30-9.30pm, accompanied by an Amazonian soundscape which will be heard across Sydney Harbour.

Bernie Krause, musician and soundscape ecologist said: ‘This segment, extracted from The Great Animal Orchestra fine art piece conveys a deep sense of reverence for the power of the biophonies, like the example recorded at dawn one day in a distinctive Amazonian biome. It is not without irony that images of these original acoustic scores are projected onto the Sydney Opera House sails at this historic moment. After all, it was from the voices of the animal world that we humans learned to dance, sing, and organise sound into formal structure. This is a tribute to those artists – the singers, dancers and drummers to whom we owe so much of our cultural expression. These acoustic expressions also carry a word of caution, a paraphrased aphorism from the late David Bowie: The future belongs to those who can hear it coming.’

After working with musicians like The Doors and creating effects for film scores including Francis Ford Coppola’s Apocalypse Now, Bernie Krause turned his back on studio work and headed outdoors to focus on field recording. Krause’s unparalleled research is a rare insight into the unseen world of animals. It reveals the beauty and the intricacy of animal vocalisations, which are now in danger of being silenced by human activity. Through his recording, Krause implores us to start listening before hush descends on the ‘great animal orchestra’.

The immersive soundscape comes to life with visualisations, created by United Visual Artists, of each animal’s contributions to the ‘orchestra’ in vulnerable habitats in Africa, North America, the Pacific Ocean and the Amazonas (Amazon River).

José Roca, Artistic Director, 23rd Biennale of Sydney, said: ‘The Great Animal Orchestra is a meditative work, giving audiences an emotional and sensory experience as they listen to the sounds of the animal world. Given that rīvus reflects on our connections with waterways, there’s no better place to preview this profound work than on Sydney’s iconic harbour.’

Barbara Moore, Chief Executive Officer, Biennale of Sydney, said: ‘The Great Animal Orchestra has been presented to enormous international acclaim in Shanghai, Seoul, London, Milan and Boston, and attracted more than 200,000 visitors in Paris. Premièring this work in Australia in partnership with Foundation Cartier allows audiences to connect globally through this shared experience, sparking conversation about our impacts on the natural world we share. We are thrilled to present a special preview of the work on the stunning Sydney Opera House sails celebrating the opening weekend of the 23rd Biennale of Sydney. The Biennale and the Sydney Opera House have an enduring relationship – the Opera House was the site of the very first Biennale in 1973 – and it is fitting to share another iconic moment as both organisations approach their 50th anniversaries in 2023.’

NSW Minister for Tourism Stuart Ayres, said: ‘I am delighted The Great Animal Orchestra is adding to what already promises to be a spectacular 23rd Biennale of Sydney by lighting up the iconic sails of the Sydney Opera House. With an accompanying soundscape carrying across the harbour this will be a fantastic and unique experience for all visitors to the CBD. The NSW Government is proud to support marquee events like the Biennale of Sydney, which showcase Sydney as the cultural events capital of Australia and will help achieve our goal of making NSW the premier visitor economy of the Asia Pacific.’

Louise Herron, Chief Executive Officer, Sydney Opera House, said: ‘The Biennale of Sydney was launched in 1973 as part of the Opera House’s opening celebrations. Over almost 50 years both organisations have played dynamic and invaluable roles in the life of the city – and continue to do so. I am thrilled we’re celebrating our longstanding relationship with this very special projection of The Great Animal Orchestra on the Opera House sails, once again sparking conversations, making connections and inspiring change.

The Great Animal Orchestra is presented as part of the 23rd Biennale of Sydney, one of the largest contemporary art events in the world. Titled rīvus, meaning ‘stream’ in Latin, the 23rd Biennale of Sydney will feature new work and commissions responding to water ecology and relationships with the natural world. Audiences will experience over 330 artworks by over 80 participants from large-scale immersive installations, site specific projects to living works. Presenting international participants include Kiki Smith, Marguerite Humeau, Sheroanawe Hakihiiwe, John Gerrard, Jumana Emil Abboud and Ackroyd & Harvey alongside Australian participants such as Badger Bates, Clare Milledge, Julie Gough and D Harding. The list of participants extends beyond the realm of the visual arts and includes bodies of water and their custodians around the world including Australia, Bangladesh and Ecuador.

To book your free tickets to The Great Animal Orchestra, go to
www.biennaleofsydney.art/participants/the-great-animal-orchestra/

Images for The Great Animal Orchestra can be downloaded HERE

All programs will have conditions of entry adhering to the relevant NSW Government Public Health Orders and health advice.

ABOUT FONDATION CARTIER POUR L’ART CONTEMPORAIN
Fostering new creations and ideas in contemporary art since 1984, the Fondation Cartier pour l’art contemporain presents a pioneering artistic program from a wide range of emerging artists to the most prominent creators of our time. Challenging unexpected and surprising encounters between artists, scientists, philosophers, musicians, and architects from all over the world and different walks of life, the Fondation Cartier has developed a program of distinctive exhibitions, live performances and conferences.

Over the past 40 years, the Fondation Cartier has built a unique permanent collection of more than 2000 works by 500 artists from 50 nationalities by collecting and conserving works born from those unique collaborations.

The Fondation Cartier seeks to share these artistic experiences and expressions far and wide. From the historic Paris-based building designed by the architect Jean Nouvel, the Fondation Cartier travels the world, partnering with major cultural institutions. In 2022, the Fondation Cartier will be present in Paris, Milan, Tokyo, Shanghai, Sydney, and New York, engaging new audiences to discover the works of contemporary artists, see the world through their eyes and be challenged by their perspective.

One of the Fondation long lead program explores major current environmental issues through artistic projects that invite the public to look at the beauty and vulnerability of the living world in a new light – amongst them The Great Animal Orchestra (2016), Trees (2019), Claudia Andujar, The Yanomami Struggle (2020).

ABOUT BERNIE KRAUSE
Since 1968, Bernie Krause has traveled the world recording and archiving the sounds of creatures and environments large and small. Working at the research sites of Jane Goodall (Gombe, Tanzania), Biruté Galdikas (Camp Leakey, Borneo), and Dian Fossey (Karisoke, Rwanda), he identified the concept of biophony based on the relationships of individual creatures to the total biological soundscape as each establishes frequency and/or temporal bandwidth within a given habitat. His contributions helped establish the foundation of a new bioacoustic discipline: soundscape ecology. Krause has produced over 50 natural soundscape albums in addition to the design of interactive, non-redundant environmental sound sculptures for museums and other public spaces throughout the world. His installations can be experienced at the National Museum of Natural History (Smithsonian Institution, Washington, DC), the California Academy of Sciences (San Francisco), the Houston Museum of Natural Science, the Chicago Science Museum, the American Museum of Natural History (New York City), five special commissions at the World Financial Center (New York City) and more than 30 other venues across North America and Europe.

ABOUT UNITED VISUAL ARTISTS
United Visual Artists (UVA) is a London-based collective founded in 2003 by British artist Matt Clark. Its diverse body of work integrates new technologies with traditional media such as sculpture, performance and site-specific installation. Drawing from sources ranging from ancient philosophy to theoretical science, the practice explores the cultural frameworks and natural phenomena that shape our cognition, creating instruments that manipulate our perception and expose the relativity of our experiences. Rather than material objects, UVA’s works are better understood as events in time in which the performance of light, sound and movement unfolds. UVA has been commissioned internationally by institutions including the Barbican Curve Gallery (London); Serpentine Gallery (London); Fondation Cartier pour l’art contemporain, (Paris), YCAM (Tokyo) and others.

Situated along the waterways of the Gadigal and Burramattagal people, the Biennale of Sydney in 2022 titled rīvus will be articulated through a series of conceptual wetlands and imagined ecosystems populated by artworks, public programs, experiments, research and activisms, following the currents of meandering tributaries that expand into a delta of interrelated ideas.

rīvus, meaning ‘stream’ in Latin, will enable aqueous beings – rivers, wetlands and other salt and freshwater ecosystems – to share a dialogue with artists, architects, designers, scientists, and communities. Considering the water ecology’s perspective raises unlikely questions: Can a river sue over psychoactive sewage? Will oysters grow teeth in aquatic revenge? What do the eels think? Are waves the ocean’s desire?’

Those invited to take part in the Biennale are known as ‘participants’ rather than ‘artists’, reflecting their diverse talents, skills, practices and modes of being that extend beyond the realm of the visual arts. The participants announced so far live across six continents and 33 countries such as Cameroon, Cuba, Venezuela, Slovenia, Taiwan, Tonga and the Netherlands.