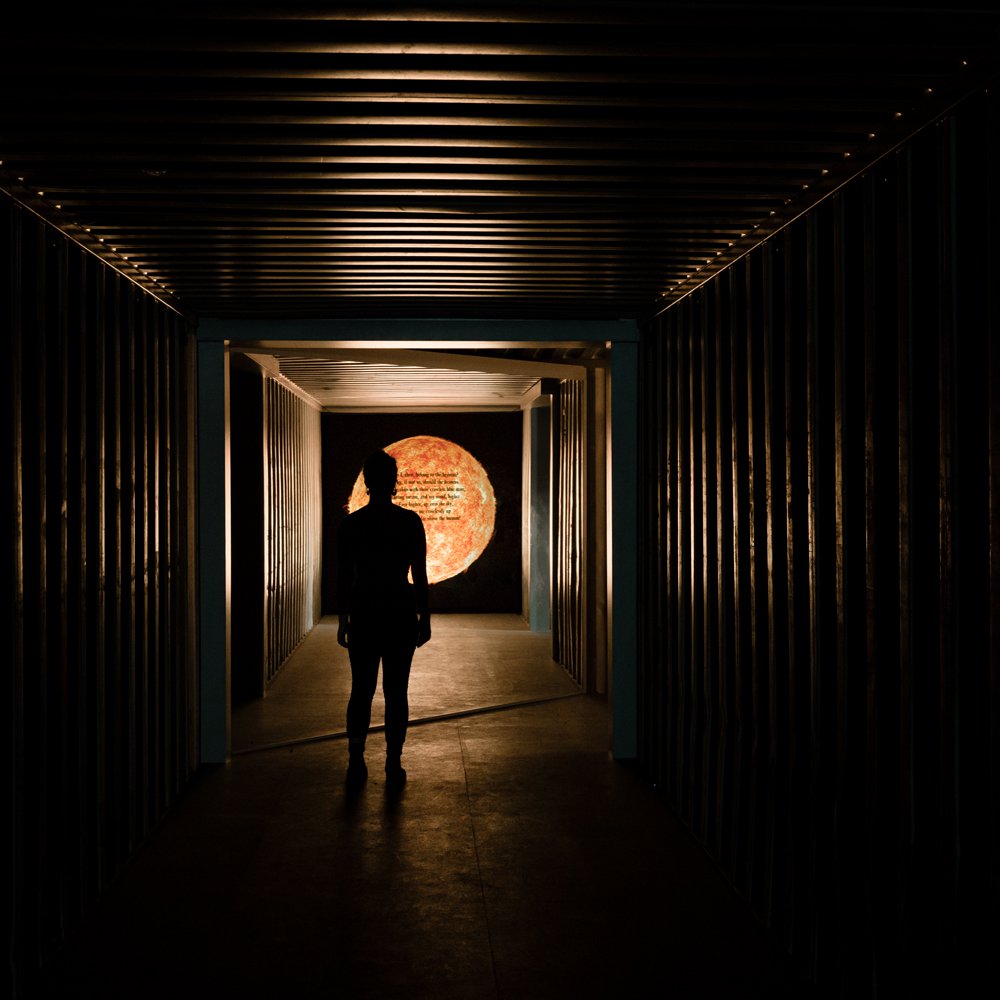 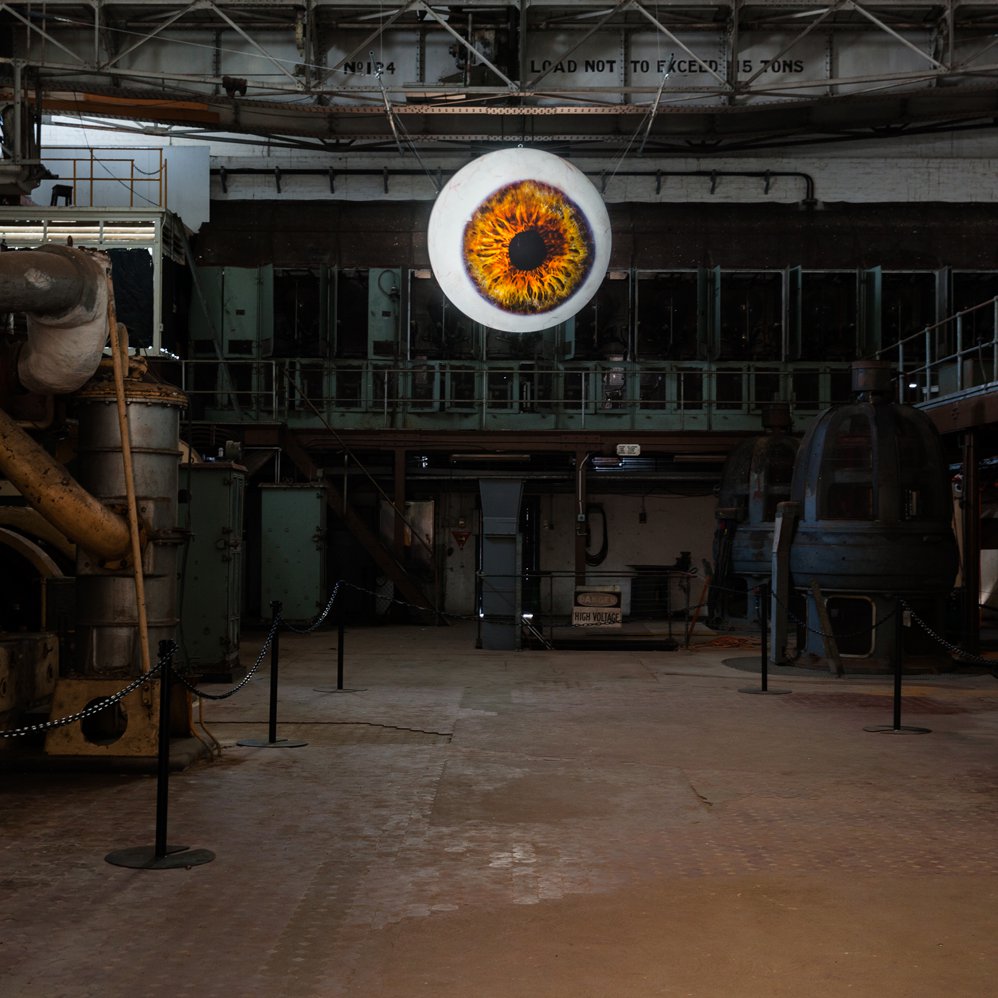 Yukinori Yanagi, Landscape with an Eye, 2018 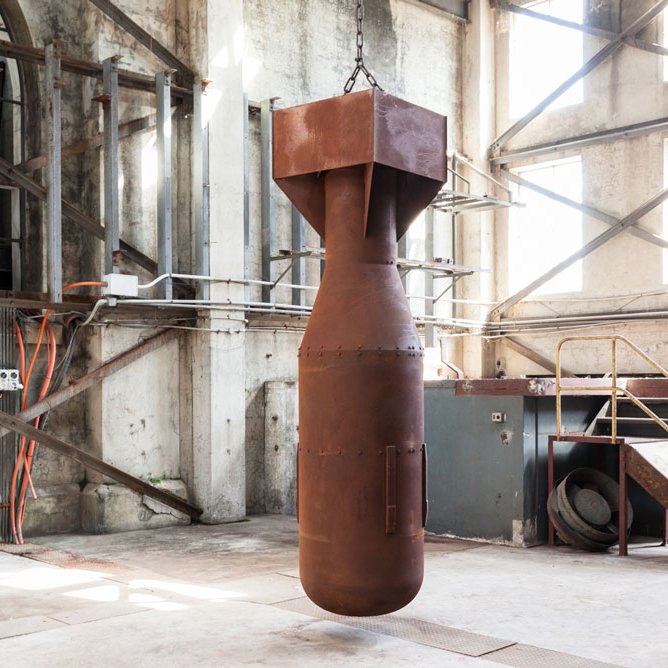 Born 1959 in Fukuoka, Japan
Lives and works in Hiroshima, Japan

Yukinori Yanagi explores fundamental questions of human existence through site-specific installations that negotiate a diverse range of media. Interested in questions of identity, both on a social and national scale, many of Yanagi’s earlier works have examined individuality and the ways we are defined by constructs such as class, gender and ethnicity. More recently, his increasingly ambitious, large-scale installations pose questions that relate to the consequences of technological advancement and globalisation.

At Cockatoo Island, Yanagi exhibits a series of three interconnected artworks that investigate industrialisation and progress in a time of global capitalism. In the Turbine Hall, Icarus Container, 2018, takes the form of a labyrinth of shipping containers repurposed by the artist to represent global networks of distribution. Inside the linked containers a series of mirrors reflect the sky and a video projection featuring a burning sun; a reference to the development of nuclear technology. Each mirror features text drawn from Yukio Mishima’s poem, ICARUS, which concludes F-104, the epilogue of his 1969 collection of essays titled ‘Sun and Steel: Art, Action and Ritual Death’. In F-104 Mishima describes the experience of ascending high into the sky in an F-104 Starfighter, a single-engine supersonic aircraft.

Icarus Container also takes inspiration from Ancient Greek mythology, referencing the tale of Icarus, the son of master craftsman Daedalus. After creating a labyrinth to confine the Minotaur at the request of King Minos of Crete, Daedalus and Icarus were themselves imprisoned within it. Fashioning wings from wax and feathers so that they could escape, Daedalus cautioned his son not to fly too close to the sun for fear that the heat would melt his wings. Revelling in the joy of flight, Icarus did not heed the warning and soared high into the sky before falling into the sea, his wings destroyed. Yanagi’s interpretation is an analogous warning of the consequences of human obsession with technology and advancement.

Continuing his investigation into the development of nuclear technology, Yukinori Yanagi’s video installation Landscape with an Eye, 2018, features an enormous eye floating suspended in space. Gazing into the iris, the viewer is presented with archival film footage depicting the violence of nuclear tests conducted at different sites in the Pacific Ocean including Bikini Atoll, Enewetak Atoll and Mururoa Atoll, from 1946 to 1996. Landscape with an Eye bears witness to the way humans have exploited energy and the environment throughout history in the pursuit of power and progress. The images flickering across the surface of the eye resonate with the industrial surroundings of the former Powerhouse, a space once used to produce energy in support of advancement and modernity.

Yanagi’s third work, Absolute Dud is a one-tonne iron replica of Little Boy, the atomic bomb dropped on Hiroshima on 6 August 1945 during World War II. More than 300 nuclear explosions occurred in the Pacific Ocean region between 1945 and 1996, commencing with Little Boy and concluding with Xouthos, a nuclear test at Fangataufa Atoll at 11.29 am on 27 January 1996. Suspended from the ceiling of the former Rectifier Room, the ominous shape provides a haunting, physical reminder of the ultimate consequences of war and the misuse of power in the name of progress.

Presentation at the 21st Biennale of Sydney was made possible with generous support from Anonymous and assistance from the Japan Foundation; the Australia-Japan Foundation of the Department of Foreign Affairs and Trade; and Panasonic