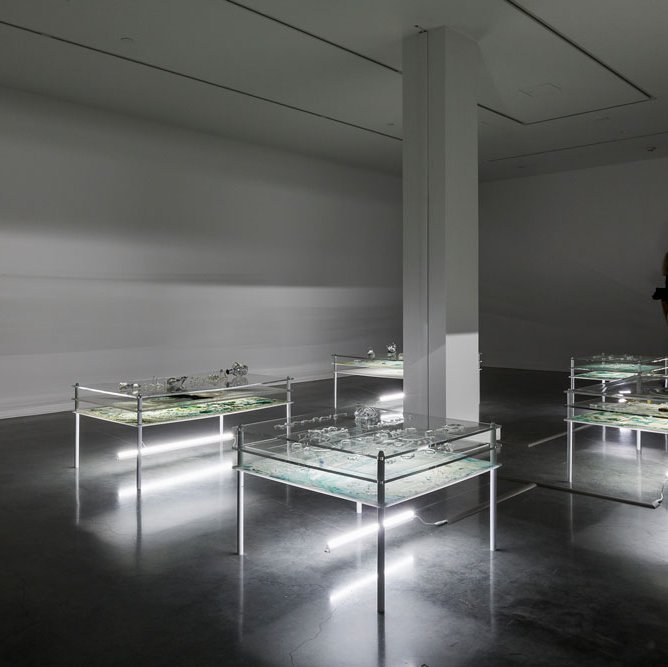 Born 1976 in Riihimäki, Finland
Lives and works in Helsinki, Finland

Tuomas Aleksander Laitinen’s practice seeks to deconstruct binary logic, adopting structures of thought that rely on a system of connections rather than oppositions. Laitinen is interested in rethinking the epistemological assumptions underpinning Western capitalism, which sees these distinctions as the basic organising principle of the world.

Describing how his art attempts to refute such value systems, Laitinen has said: ‘In my recent works, I’ve been using the concept of porosity as a kind of counter-argument against binary thinking, where things are typically put into clearly defined categories […] I’m interested in how things and their relationships can be treated so that they freely flow and filter into each other, thus building entanglements between different topics and substances.’

Laitinen’s new commission, Dossier of Osmosis, 2018, at the Museum of Contemporary Art Australia, fits within this line of reasoning. The installation borrows from the language of an archaeological display, consisting of a series of tiered table-like structures displayed on the gallery floor. Containing objects and traces of chemical reactions/biological processes, the assembled fragments are described through nonsensical diagrams and graphs set within the layers. An accompanying narrative, partly generated by an algorithm, speculates on the potential of non-human agencies, complicating definitions of authorship.

In biology, osmosis refers to the movement of a solvent through a semipermeable membrane. Dossier of Osmosis reveals the incoherence between natural processes and the regulatory structures imposed upon them, prohibiting ‘osmosis’, or the integration of ideas from occurring. The installation is periodically activated by a performer operating an ultrasonic speaker emitting a sound work composed of guide texts, involuntary noises and utterances that become audible when silent signals hit a solid object. When a performer is not present, the speakers remain in the space, pivoting and responding to the sculptural forms independently.

Despite sound being produced, the objects are not altered or affected. The biological transformations represented in the space, therefore, assert their own agency and are not subject to the various documents, graphs and other methods which attempt to describe them. As a result, Laitinen’s work can be read as demonstrating the logic of control and mastery associated with neoliberalism. In addition to this grounding in socio-political reality, Dossier of Osmosis functions as a self-contained affective environment, favouring symbiosis and exchange.

Commissioned by the Biennale of Sydney with assistance from Geoff Charnock and Giovanni Munoz; and Frame Contemporary Art Finland