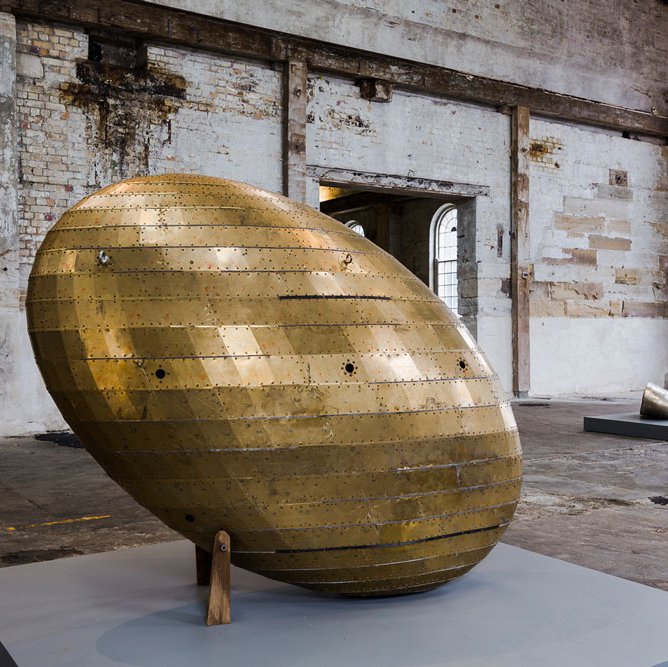 Tawatchai Puntusawasdi’s monumental forms skew and contort visual reality, challenging conventional notions of perception and objective understandings of the physical world. Working with ordinary materials including hardwood, slate, organic fibres and various types of metal, Puntusawasdi’s sculptures promote a heightened awareness of space, encouraging the viewer to acknowledge the surrounding spatial field as an intrinsic part of the work itself. Puntusawasdi uses complex mathematical calculations to generate forms, which are designed and constructed without the aid of modern technology. His shelter-like sculptures provoke consideration of subjectivity and alternative states of being, echoing a fundamentally Buddhist worldview.

Puntusawasdi’s works often cite his interest in navigation, cartography, astronomy and historical understandings of the universe. Continuing this preoccupation, Puntusawasdi presents two new sculptures, Super Moon, 2018, and A Dim Night, 2018. Super Moon refers to the phenomena that occurs when a new or full moon reaches its closest possible distance from the Earth in its elliptic orbit (perigee), appearing unusually large when viewed from Earth. The presence of a supermoon has been linked to the occurrence of natural disasters, including storms, earthquakes and volcanic eruptions. Despite a lack of evidence to support this theory, there have been suggestions of a causal link between the occurrence of supermoons and events such as the 2011 Tōhoku earthquake and tsunami and the 2004 Indian Ocean earthquake.

Composed of hundreds of numbered copper parts bolted together, Super Moon re-creates the mystery and intrigue surrounding the curious lunar event. Resembling a visionary invention from a thinker of another age, Super Moon attests to the enduring human fascination with the cosmos and the greater unknown. Balanced precariously on its axis, the sculpture appears to defy the laws of gravity. Puntusawasdi’s extra-terrestrial creation reflects ideals contained in Renaissance humanism – a captivation with the cosmos and the desire for human progress and fulfillment that still reverberate in today’s consciousness.

A Dim Night, a smaller companion piece made from brass and nickel alloy, is similarly alluring. Its intimate scale allows the viewer to examine the sculpture in its entirety, manifesting the human striving towards knowledge. Resonating with the industrial past of Cockatoo Island, the sculptures are displayed alongside a new series of engravings on copper sheet documenting Puntusawasdi’s process. These give incredible insight into the laborious techniques used by the artist to produce his designs, further likening him to a master inventor.

Presentation at the 21st Biennale of Sydney was made possible with generous support from Chizuko Yashiro and assistance from MAIIAM Contemporary Art Museum, Chiang Mai and the Australia-ASEAN Council of the Department of Foreign Affairs and Trade