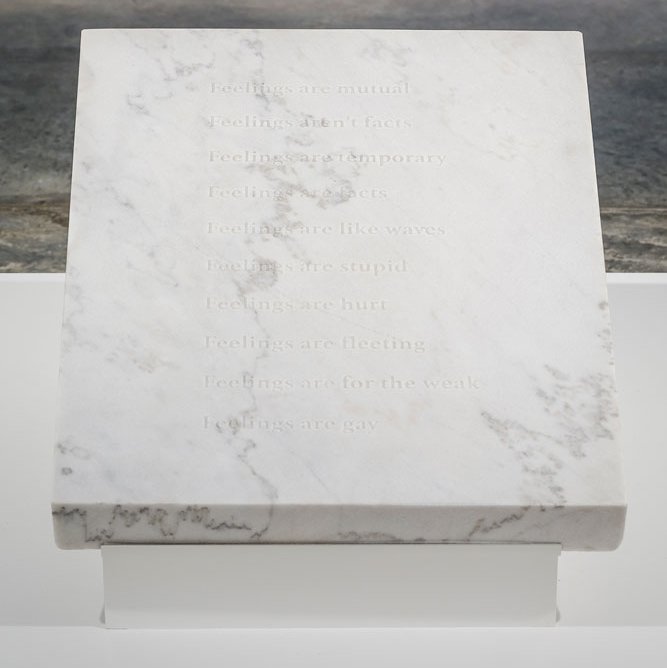 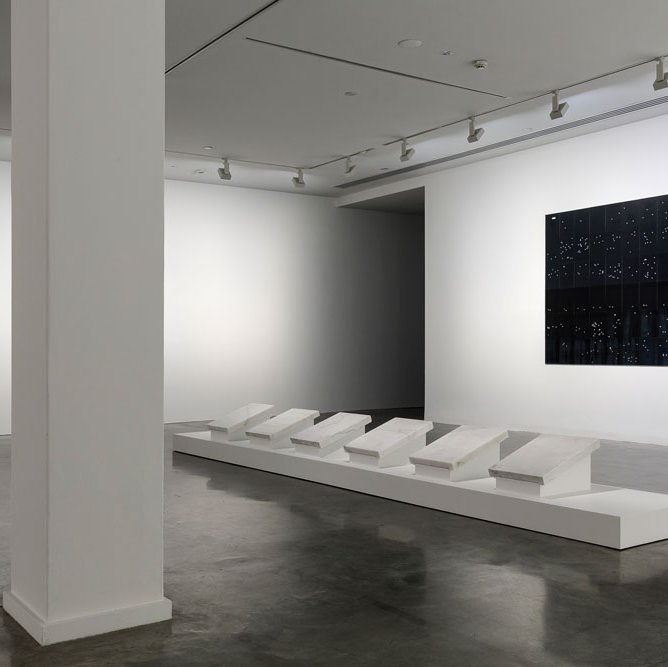 Nicole Wong. Installation view (2018) at the Museum of Contemporary Art Australia for the 21st Biennale of Sydney

Working beyond the bounds of any single medium, Nicole Wong adopts a process-driven approach to investigating philosophical questions associated with time, the tenuous connections between words and objects, and the limits of communication. Often quiet and unassuming, Wong’s works invite introspective thought through their appeal to universal sentiments and desires. Deftly weaving together wordplay and double entendre throughout her practice, Wong explores the connections between literal and connotative meanings. Her works enter the realm of semiotics, using everyday objects and common materials to question the relationship between signifier (a sign’s physical form) and signified (a sign’s meaning).

Embodying the artist’s preoccupation with language, Wong presents a series of marble works engraved with the top-ten Google search results for specific phrases including ‘I can’t’, ‘Maybe you’ and ‘Feelings are’. The emergent results reveal deeply private sentiments that are shared by countless others. These automated lists betray the simultaneous distance and closeness between individuals in the virtual sphere, and point to the absurdity of using a programmed tool for an emotional problem. The works also reference the modernist concept of the ‘readymade’, where the work exists through the artist selecting and designating existing materials, in this case, millions of desperate cries entered into Google’s search engine.

The Stars: A New Way to See Them, 2015, plays with the visual implications of language. To produce the work, Wong selected 84 pages from a book on astronomy, covering each word with black ink and leaving only the repeated word ‘star’ visible. When viewed at a distance, the accumulated ‘stars’ form a constellation in themselves. This visual play between the micro and macrocosmic resembles the techniques used in concrete or shape poetry, where the typographic effect is just as significant as the linguistic meaning.

Wong often generates an artwork through a series of purposeful actions, the finished result acting as record of the activity undertaken by the artist. In Time Piece, 2015, Wong created a permanent representation of time, using a fine-tip pen to draw a circle at the speed of the hour hand of a clock over a 12-hour period. Similarly, in Waiting Game, 2015, Wong used a predetermined system whereby she rolled a 20-sided die, each face of the object determining the diameter of a dot that Wong would transcribe on paper, resulting in the creation of a braille-like patterned effect.