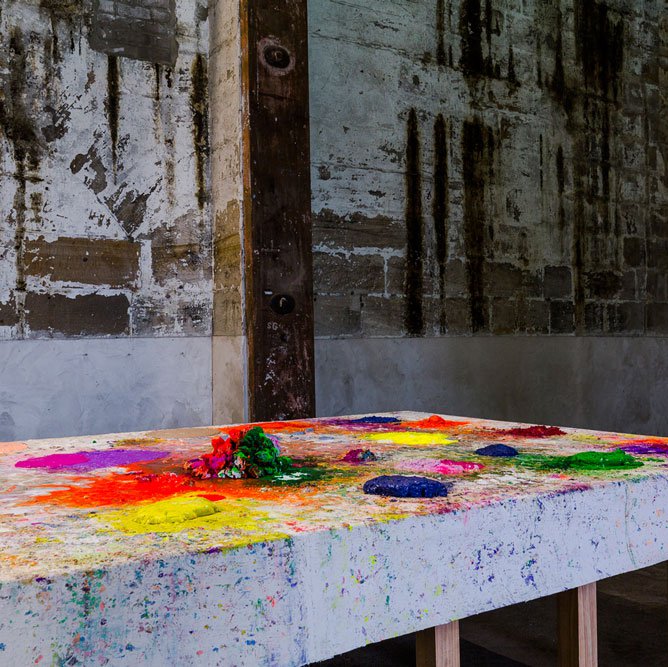 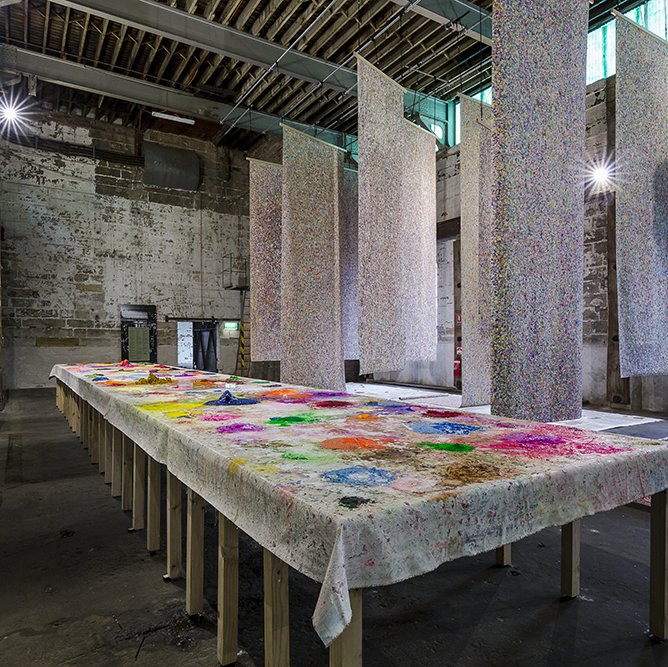 Mit Jai Inn is considered by many to be a pioneer of Thai contemporary art. Defying conventional boundaries, both physically and conceptually, Mit’s artworks often appear as hybrid objects – paintings that could be sculptures, or sculptures that incorporate painterly methods. Varying in size and format, his paintings disregard traditional methods of display, often appearing as long rolls of canvas that unfurl across the floor or hang suspended in draped loops across gallery walls.

Mit’s practice is a meditation on light and time, each painting closely relating to the site in which it is made. Working at Cockatoo Island in the months leading up to the opening of the 21st Biennale of Sydney, Mit has developed a large-scale installation encompassing multiple elevations. Titled Planes (Hover, Erupt, Erode), 2018, the immersive presentation invokes his open-air Chiang Mai studio while also referencing the history of Cockatoo Island as a site of industrial manufacture. Planes (Hover), 2018, is a series of two-faced, densely layered suspended works that welcome circumnavigation, playing on manifestations of power in the form of the scroll and at the scale of the monument. The tabled work, Planes (Erupt), 2018, reads as a landscape that performs colour interactions, movements and coups. In Planes (Erode), 2018, a field of scraped impasto and pigment signposts are immersed in a sea of water and alcohol. As the 'spirits' are absorbed and consumed over time, the painting will gradually emerge.

Investigating the materiality of the medium and its relationship to the body, Mit engages in a physically rigorous cycle of labour in which he adds, augments, overlays and erases pigment. Working with palette knives and decades-old blocks of dried oil paint which he revives with linseed oil, an activating agent that thins chunks of pigment into a more workable form, Mit pulls and disperses the paint across vast sheets of canvas in varying treatments. This method of slowly building each painting, layer by layer, brings a highly textual, tactile quality to his work. The overarching title of the installation, Planes (Hover, Erupt, Erode), 2018, alludes to the simultaneity of the measurable and the imperceptible. Vertical and horizontal planes bisect and animate the space, inviting observation from both close and distant perspectives.