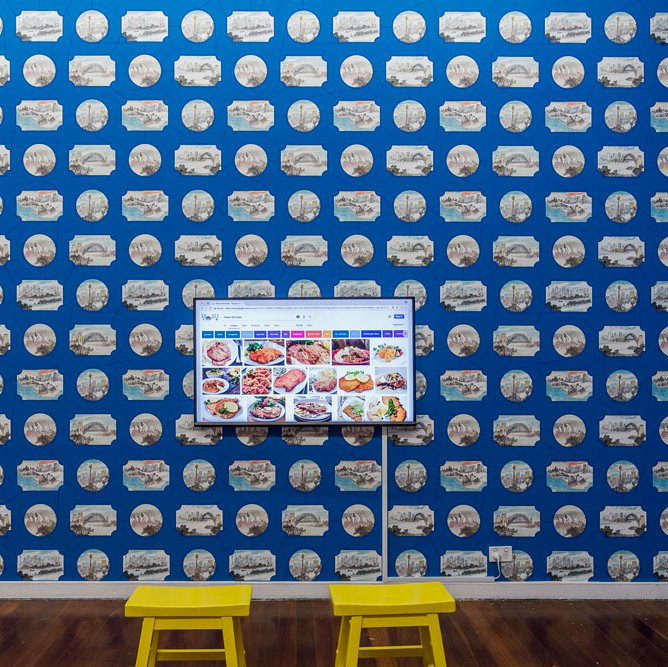 Jun Yang’s practice exists at the intersection of film, installation, performance and public engagement, and investigates the indeterminate position of the foreigner in relation to assimilation and acculturation. As a Chinese-born Austrian immigrant who divides his time between Vienna, Taipei and Yokohama, Yang’s work is deeply tied to his personal experience of migration, exploring liminality and conflicting notions of idealism and reality. Yang is also concerned with globalisation and its concomitant value systems, particularly in an Asian context.

Yang exhibits Becoming European or How I Grew Up with Wiener Schnitzel, 2015–ongoing, which charts the artist’s experience of migration to Europe as a child; his family relocated to Austria when he was four. Existing in various formats, the work was originally presented as a lecture performance in 2012 for Europe (to the power of) n, a transregional art project that took place in cities around the world.

The work was produced as a video in 2015, at the height of the ‘European migrant crisis’ when thousands of refugees (mostly Syrian and other Muslim-majority countries) arrived in Europe – many of them passing through or stopping in Vienna. Responding to this significant global issue, Yang parallels his own narrative of migration with the experience of those travelling across the Mediterranean Sea and Southeast Europe. The visual aspect of Becoming European consists of a search of Google’s image repository, which seeks to comprehend a new and unfamiliar culture, utilising key search terms such as ‘refugees’, ‘migration’ or ‘Chinese’. Depending on where the video is shown, the Google search is repeated, resulting in different images that speak to the region in which it is exhibited.

Yang’s latest version of Becoming European is part of a larger installation, Xīní / Xuělí Blue Room, 2018, a wallpapered space with motifs representing well-known sites in Sydney including the iconic Sydney Opera House and Sydney Harbour Bridge. These have been painted by a traditional Chinese landscape ink painter who has never visited the city, depicting an imagined reality. As an extension of the video work, the wallpaper operates as a metaphor for comprehending a foreign culture; previous experience and frames of reference form a very subjective understanding of place, self and society. In 2017, Yang spent six weeks undertaking intensive research in Sydney, particularly in the city’s western suburbs, an area where many newly arrived migrants and refugees settle. Yang met with a number of migrant and other community groups to develop an in-depth understanding of the cultural diversity and make-up of the city. The installation has been conceived to host several community events throughout the exhibition period.

Presentation at the 21st Biennale of Sydney was made possible with generous assistance from Amanda Harkness and Karen Barrett; Mami Kataoka; Phileas; and the Austrian Federal Chancellery