The Biennale of Sydney, Noakes Group and BE. Collective Create a Safe Passage to Reclaim and Revive the Memory of Concealed Culture 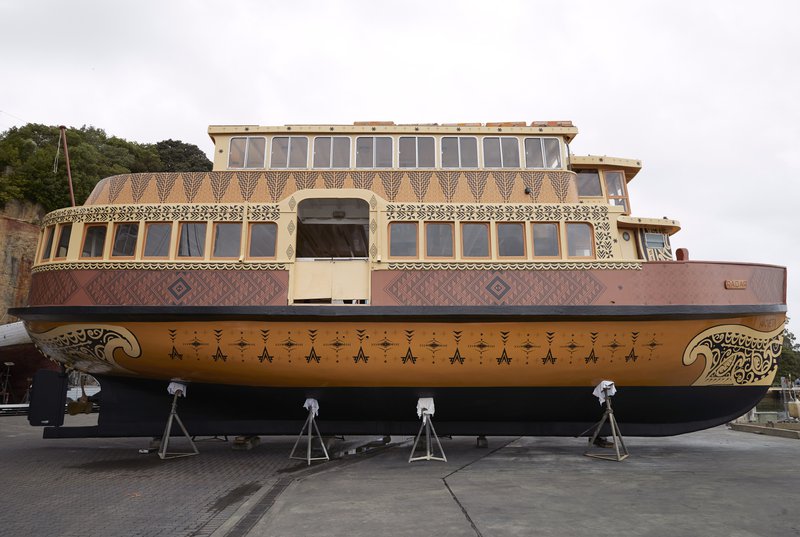 Sydney, Australia: The Biennale of Sydney has today revealed NIRIN HAIVETA, a visually striking artwork on Sydney’s Harbour, created in collaboration with BE. and supported by Noakes Group.

To create a safe passage for people to share cultures and identities, for the 22nd Biennale of Sydney, titled NIRIN, the vessel – previously known as Radar – has undergone a complete restoration, transforming both internally and externally.

Launched in 1947, the traditionally crafted wooden boat was the “mother” of the Rosman fleet and remained in continuous service for more than sixty years. For NIRIN, Melbourne arts and cultural collective BE. have transformed the skin of the vessel with a design that celebrates Pasifika women’s mark-making through a visual representation and interpretation of Pasifika tattoo motifs.

Grace Dlabik, BE. said: “This reimagined vessel offers a connection to our migration story, paying homage to the richness of Pasifika women’s markings worn by the artists’ ancestors and passed down through bloodlines. We are grateful to Sean Langman for his deeply respectful and generous support with revitalising this ‘mother of the fleet’ and in so doing sharing cultures and identities through the passage of water.”

As part of a rich education program, and as a means of engaging and making connections with people, places and times NIRIN HAIVETA will transport over 2,500 students to Cockatoo Island from Circular Quay free of charge from Monday to Friday each week of 22nd Biennale of Sydney exhibition. Once students and the public arrive on Cockatoo Island, they will engage with contemporary artworks from the 22nd Biennale of Sydney.

Every Saturday NIRIN HAIVETA will also transport audiences from Sydney Olympic Park Wharf to Cockatoo Island, also free of charge, helping to facilitate access for residents in Sydney’s West to the Biennale of Sydney on Cockatoo Island.

Paschal Daantos Berry, Curator, Programs and Learning and Co-Head of Communications and Community Engagement, Biennale of Sydney said: “NIRIN HAIVETA is an important reminder of the survival of cultural material, despite the corrosive nature of colonisation. This vessel, which uncovers and re-learns cultural practices, is a fitting mode of transport for school kids to travel to the Biennale of Sydney’s learning space on Cockatoo Island to learn about histories, cultures and stories.”

Sean Langman, Managing Director, Noakes Group said: “The relaunch of Radar as part of the 22nd Biennale of Sydney is incredibly exciting. For me, and for Noakes Group, this project is inclusive of a variety of different cultures, and to connect with First Nations communities in our region is an important project for us. On top of this, the art of boat building is incredibly valuable to our history. So to us, vessels like Radar are alive; they’re living, and they have personality. Given that Radar is over 73 years old, the original artisans that built her are no longer with us. We are now seeing a new generation of artisans making their mark and changing history. So to me this is living art.”

The Biennale of Sydney 22nd exhibition titled, NIRIN, is an artist-and First Nations-led endeavour, presenting an expansive exhibition of contemporary art and events that connect local communities and global networks. Presenting the work of over 100 artists from around the world, NIRIN is open free to the public from 14 March until 8 June 2020 at six sites across Sydney: Art Gallery of New South Wales, Artspace, Campbelltown Arts Centre, Cockatoo Island, Museum of Contemporary Art Australia and the National Art School. The 22nd Biennale of Sydney (2020) exhibition NIRIN will be open from 14 March until 8 June.