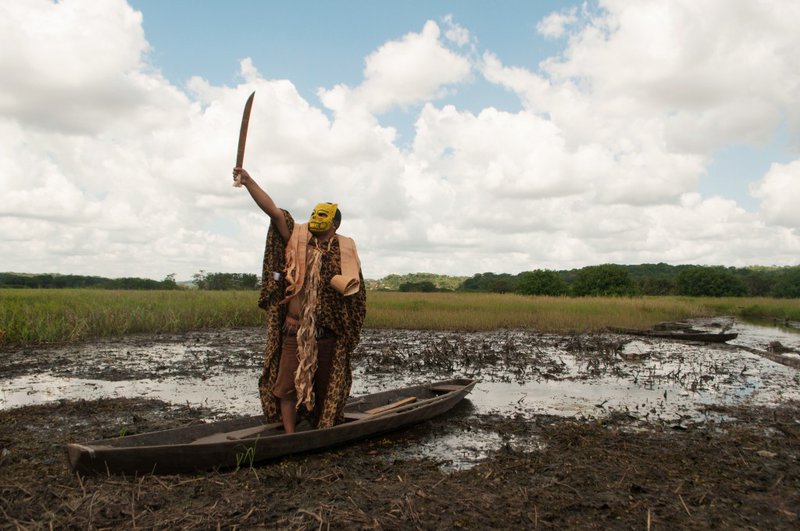 UPDATE: due to renewed stage 3 restrictions in Melbourne, ACCA had to postpone NIRIN NAARM. We will keep you informed of future reopening dates.

The 22nd Biennale of Sydney is an artist- and First Nations-led endeavour presenting an expansive exhibition of contemporary art that connects local communities and global networks. NIRIN, meaning ‘edge’, is a word of Brook’s mother’s Nation, the Wiradjuri people of western New South Wales. NIRIN has been conceived as a world of endless interconnected centres; a space to gather and to share, to rejoice, disrupt, and re-imagine.

NIRIN opened in Sydney to unprecedented acclaim in March 2020, bringing together more than 700 artworks by 101 artists and collectives from around the world to inspire and reflect on our world today, challenging dominant narratives and proposing exciting new futurisms and paths to healing. Following closure to the public after 10 days due to COVID-19, this year’s Biennale has recently reopened in Sydney with extended dates until September.

At a time when travel between states is limited, ACCA is delighted to collaborate with the Biennale of Sydney and Brook Andrew to present NIRIN NAARM for Melbourne audiences, a selection of video works, a sculpture and an installation from this landmark edition of the Biennale of Sydney – bringing NIRIN into dialogue with NAARM, a Boonwurrung and Woiwurrung word which refers to the land and waters of the Melbourne area.

NIRIN NAARM presents the work of artists from Australia, Aeoteroa/New Zealand, Brazil, Canada, Haiti, Kashmir, Mexico, South Africa, Spain, USA and elsewhere. It is set against a number of increasingly urgent social, cultural and political contexts and backdrops, such as the climate crisis and devastating bushfires in Australia and Brazil; the current global pandemic; and in solidarity with global activism related to the Black Lives Matter movement, which has underscored local and global histories of violence and discrimination, along with questions of justice, truth-telling, reconciliation and reparation. NIRIN is at the forefront of global movements to centre indigeneity, to reconsider cultural narratives and practices, and to reimagine public spaces, monuments and memory.

Brook Andrew, Artistic Director of NIRIN said: “Reflecting on the recent international rallies sparked by yet another death in custody, this time the disgraceful treatment and murder in plain sight of Mr Floyd in the USA, this event reminds everyone regardless of political position or sway that the inequality throughout humanity is real and palpable.

Deaths in custody in Australia is still a silenced problem and continues the denial of equality and manipulation of how many Australians are still not in touch with Indigenous people, the legacy and inter-generational affects of colonialism and how this translates to a disconnection to understanding why there is still no prosecution of police for the over 400 Indigenous Australian murders in custody. Similar situations are faced by Trans and other people of colour internationally – let’s cast our eyes north east to West Papua, and this is just one of many states of denial of racism and genocide happening now.

This is why a version of NIRIN, called NIRIN NAARM is important to showcase in Melbourne, especially with the inspirational numbers of people demonstrating with the BLM movement recently. NIRIN is a fist in the air and levelling the reality of many issues that touch through and around the BLM issues, including remote communities internationally and also those of us who are often silenced or pushed to the side. NIRIN and NIRIN NAARM demonstrate how artists have the power to inspire and lead through difficult global times. There are many turning points in the world right now: come and be a part of this story and immerse yourself, your family and friends in inspiration, change and imagined futures. Melbournians and visitors to Melbourne can discuss issues exploding through the audio-visual power of NIRIN NAARM which is a lens to view the exhibition NIRIN currently open in Sydney.”

ACCA Artistic Director Max Delany said: “We are honoured to work with Brook Andrew and the Biennale of Sydney team to develop this special satellite presentation of NIRIN at ACCA. This unprecedented collaboration speaks to the responsive, resourceful and collegiate ethos of both organisations to find new ways of working together, and in solidarity with wider cultural movements.

Both ACCA and the Biennale have experienced interrupted programming due to the COVID-19 related gallery closures, so this is an exciting opportunity for us to work together to bring some of NIRIN’s important, vitally relevant works to as wide an audience as possible”.

Barbara Moore, Chief Executive Officer, Biennale of Sydney said: “The Biennale of Sydney unites people from across the world to stimulate dialogue and inspire change. Events of 2020 have changed the world, and in these challenging times, it is more important than ever for people to find ways to connect, help each other, listen, collaborate and heal – all core themes of NIRIN. We are thrilled to be working with ACCA on this satellite presentation of the 22nd Biennale of Sydney for audiences in Victoria to enjoy.”

Arthur Jafa’s (born 1960, Mississippi) seminal work The White Album, which was awarded the prestigious Golden Lion at the Venice Biennale in 2019. A ground-breaking open-ended video project about art, race and online culture, The White Album moves between found internet footage and Jafa’s own filmic images in an unflinching look at whiteness.

Colectivo Ayllu / Migrantes Transgresorxs (formed, 2009, Madrid Spain) is a collaborative research and artistic-political action group formed by migrants, people of colour, queer and sexualgender dissidents from the ex-Spanish colonies. At ACCA they will present their recent film Beautiful creatures 2020, an exhilarating critique of Western and heteronormative constructions present in the Spanish colonial project.

Victoria Hunt’s (born on the land of the Yugambeh people, Surfers Paradise, lives and works in Sydney) mesmerising video TAKE 2019 draws together mana wahine (female knowledge), dance and archival materials to retell the story of the removal of the ancestral Māori meeting house, Hinemihi o te Ao Tawhito, from Aotearoa/New Zealand to England in 1892. TAKE constitutes an emotional engagement with history, and a call for the restitution of cultural material to the places from which they originally came.

Sayed Shariyar (born 1992, Srinigar, Kashmir) is a photographer, filmmaker and member of the collective of documentary photographers exhibiting under the banner of Shaheed/Witness/Kashmir whose works document the exhilaration of the struggle for freedom in Indian-held Kashmir, now one of the most militarised zones in the world, and the violence of its consequences. His new video Pushed to the Wall 2020 is presented at ACCA as a world premiere.

Recent videos by Denilson Baniwa (born 1984, Amazonia, Brazil) that, through activism, demonstration and performance seek to rescue indigenous memories and narratives, actively inserting them into our contemporary world, through ‘strategies of expression and struggle [which] give voice to our people’.

Other highlights of the NIRIN NAARM program include Maria Thereza Alves (born 1961, São Paulo) OYKOVITERI ITEKO’A MÔĪNGUEVYA (Decolonisation continues) 2020, a newspaper project fostering Indigenous-led discussions about history and the environment, made by members of the Jaguapiru Reservation, Mato Grosso do Sul, considered the most violent state against Indigenous people in Brazil.

15 Screens, a program hosting a variety of moving image material, from artistic video work, documentary and archival footage, to infomercials, music video clips and short film, will also be included. Varied in style, these 29 screen-based works by 19 artists are united in their expression of critical issues and often marginalised histories that demand our attention, presenting a chorus of voices and expressions of strength, resilience and joy, often in the face of hardship.