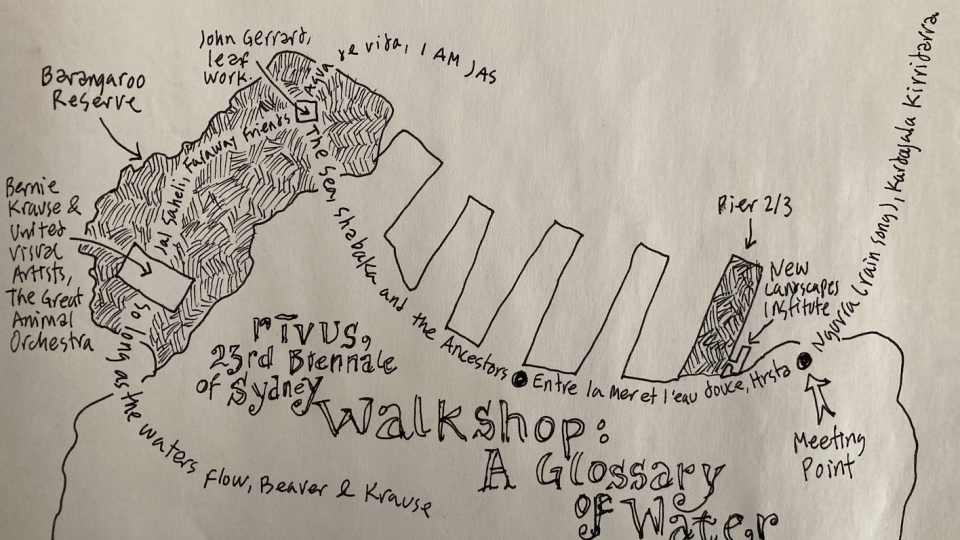 Go on a walkshop with José Roca and Juan Francisco Salazar from Walsh Bay Arts Precinct to Barangaroo Reserve.

Go on a walkshop with Glossary of Water editors José Roca, Artistic Director, 23rd Biennale of Sydney and Juan Francisco Salazar, Professor, Communications, School of Humanities and Communication Arts, Western Sydney University from Walsh Bay Arts Precinct to Barangaroo Reserve. Part walk, part workshop, soak in your surroundings and engage in the material world of the 23rd Biennale of Sydney through music and stories of diverse bodies of water. Take a moment with your thoughts as José and Juan present sense-provoking micro presentations throughout walkshop.

Meet at Pier 2/3 and walk to The Waterhouse at The Cutaway, Barangaroo

What you will need for the walkshop – a phone or tablet and headphones to listen to the Glossary of Water playlist together.

José Roca is the Artistic Director of the 23rd Biennale of Sydney (2022). He is a curator and Artistic Director of FLORA ars+natura, an independent space for contemporary art in Bogotá, and curator of the LARA collection, Singapore. He was the Estrellita B. Brodsky Adjunct Curator of Latin American Art at Tate, London (2012-2015) and managed the arts program at the Banco de la República (MAMU) in Bogotá. José was a co-curator of the I Poly/graphic Triennial in San Juan, Puerto Rico (2004), the 27th Bienal de São Paulo, Brazil (2006) and was the Artistic Director of Philagrafika 2010. He served on the awards jury for the 52nd Venice Biennial (2007) and is the author of Transpolitical: art in Colombia 1992-2012 (with Sylvia Suárez), and Waterweavers: A Chronicle of Rivers (with Alejandro Martín).

Juan Francisco Salazar is a Sydney-based, Chilean anthropologist, author and documentary filmmaker. He is a Professor at Western Sydney University and currently an ARC Future Fellow working on social imaginaries of outer space. For over 20 years, he has collaborated with artists, scientists and activists undertaking research and audiovisual work on cultural and ecological projects in Antarctica, Australia, Cambodia, Chile, Colombia, and Vanuatu. His films Nightfall on Gaia (2015, 92 min) and The Bamboo Bridge (2019, 63 min) have been screened internationally in over 25 international film festivals including CPHDOX 2015 (Copenhagen), Visions du Réel 2020 (Nyon), RAI Ethnographic Film Festival 2015 (Bristol), London International Film Festival 2020, Antenna Film Festival 2015 and 2019 (Sydney) and forthcoming in 2022 at Biennale of Sydney and at Serpentine Gallery, London.