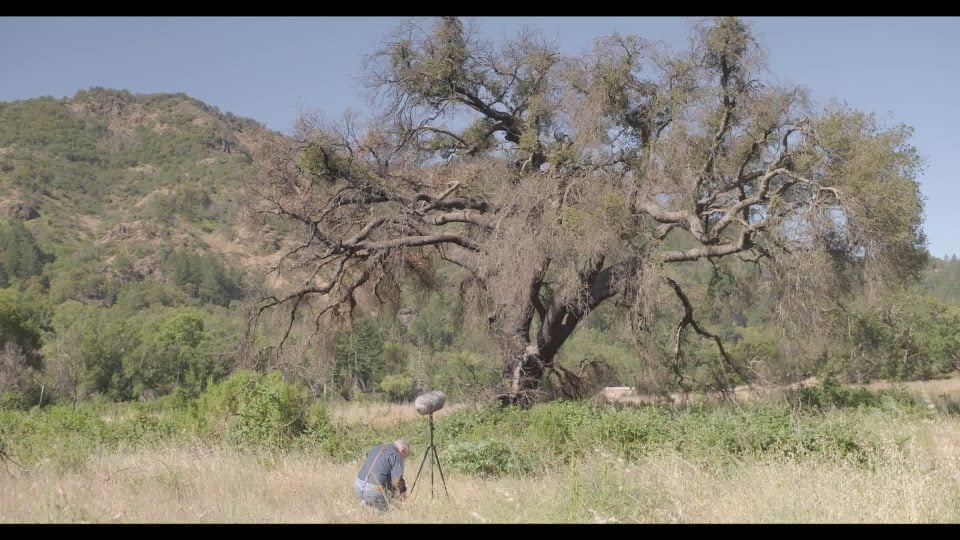 Bernie Krause, A Life with the Great Animal Orchestra

A film by Vincent Tricon

This documentary illuminates Bernie Krause’s pioneering work as a musician and soundscape ecologist.

Composed of unpublished archival footage and interviews filmed in California in 2021, the film follows Krause through Sonoma County, where he lives with his wife Katherine. Snippets of Krause’s collected soundscapes examined in the film reveal that within any ecosystem, each species has its own acoustic niche and human activities are increasingly silencing these great animal orchestras.

Bernie Krause, A Life with The Great Animal Orchestra was produced by Fondation Cartier and is the first documentary by French filmmaker Vincent Tricon.

Bernie Krause, A Life with the Great Animal Orchestra, 2021

Venue
The Waterhouse, The Cutaway at Barangaroo (Level 1)

Since 1968, Bernie Krause has traveled the world recording and archiving the sounds of creatures and environments large and small. Working at the research sites of Jane Goodall (Gombe, Tanzania), Biruté Galdikas (Camp Leakey, Borneo), and Dian Fossey (Karisoke, Rwanda), he identified the concept of biophony based on the relationships of individual creatures to the total biological soundscape as each establishes frequency and/or temporal bandwidth within a given habitat. His contributions helped establish the foundation of a new bioacoustic discipline: soundscape ecology. Krause has produced over 50 natural soundscape albums in addition to the design of interactive, non-redundant environmental sound sculptures for museums and other public spaces throughout the world. His installations can be experienced at the National Museum of Natural History (Smithsonian Institution, Washington, DC), the California Academy of Sciences (San Francisco), the Houston Museum of Natural Science, the Chicago Science Museum, the American Museum of Natural History (New York City), five special commissions at the World Financial Center (New York City) and more than 30 other venues across North America and Europe.

Vincent Tricon is a French editor and film director who studied in the editing department at La Fémis, the French grande école. He served as film editor for Divines (2016) and Jessica Forever (2018). In 2017, he was nominated at The César Awards, France’s national film awards, for Divines (2016), directed by Houda Benyamina (The Golden Camera at Cannes Film Festival 2016). His fourth short narrative feature film, Sami la Fugue, was produced by Barney Productions in 2021. Bernie Krause, A Life with The Great Animal Orchestra is his first documentary.

The Fondation Cartier pour l’art contemporain is a private cultural institution whose mission is to promote all fields of contemporary artistic creation to the international public through a program of temporary exhibitions, live performances and lectures. Created in 1984 by the Maison Cartier, the historic institution is located in Paris in a building designed by the architect Jean Nouvel. Fostering surprising and unexpected encounters between artists, scientists, philosophers, musicians and architects from around the world, the Fondation Cartier pour l’art contemporain has over the years developed a program of distinctive contemporary art exhibitions on subjects ranging from science to cinema, dance to design, and has built a unique collection that brings together more than 2,000 works by 500 artists of 50 different nationalities.

For more than two decades, the Fondation Cartier has engaged in projects that examine and address the most urgent issues facing the environment, animal life and Indigenous peoples. Full exhibitions, individual works of art, publications, performances and public talks, have explored the devastating effect of human intervention, industrialisation, and colonisation on the natural world. Exhibitions such as Yanomami, Spirit of the Forest (2003), Native Land, Stop Eject (2008), Exit (2008-ongoing), The Great Animal Orchestra (2016) and Trees (2019) explore the Fondation’s commitment to contemporary ecological questions and the role of humans in the living world.

In recent years the Fondation has initiated partnerships with major international institutions, organising exhibitions in Asia, South of America, and Europe.