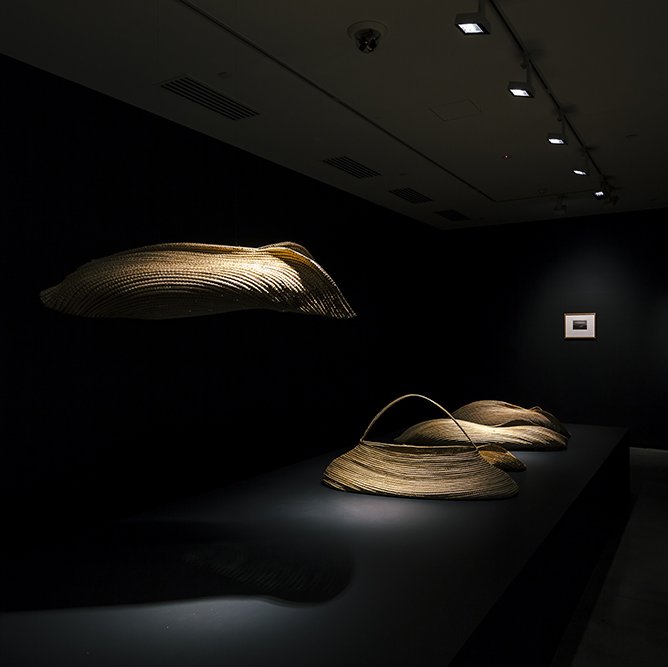 Yvonne Koolmatrie. Installation view (2018) at the Museum of Contemporary Art Australia for the 21st Biennale of Sydney

Born 1944 in Wudinna, Australia
Lives and works in Berri, Australia

Yvonne Koolmatrie is a renowned master weaver who has devoted her artistic practice to reviving the traditional fibre weaving techniques that are firmly embedded in Ngarrindjeri culture. Perfecting the coiled bundle method of weaving sedge grass and rushes, Koolmatrie has developed her own distinctive style and stitch, creating intricate sculptural forms that are infused with stories from her culture in a blend of tradition and innovation. Passing on her knowledge through workshops and classes, Aunty Yvonne has played a pivotal role in revitalising the art form and working to sustain Ngarrindjeri language and culture.

Ngarrindjeri country ranges from the Coorong, where the Murray River meets the sea, up through the Lower Lakes to the Lower Murray River region. For more than 30 years Koolmatrie has sustainably harvested the spiny-headed sedge rushes that grow throughout the area, weaving them into eel traps, cockle baskets and traditional other objects, as well as animal forms and more contemporary structures including biplanes and hot air balloons. At the Museum of Contemporary Art Australia, Koolmatrie presents a series of traditional Ngarrindjeri burial baskets that range in size. Burial sites and funerary practices hold great significance in Ngarrindjeri culture. Traditional rites, where the body of the deceased was treated to allow the spirit to return to the land before the remains were wrapped in a burial basket and placed on a raft high up in the trees, are no longer practiced. However, burial grounds are sacred sites of irrefutable importance to contemporary Ngarrindjeri culture.

When speaking about her artistic practice, Koolmatrie often returns to where her life as a weaver began: ‘At a workshop in the early 1980s with Aunty Dorothy Kartinyeri, I was introduced to the traditional methods of weaving sedge rushes (Lepidosperma canescens). This type of sedge grows along the Coorong and Murray River in Ngarrindjeri country and so weaving is linked to the river and its health – when the river suffers, the sedge grass is harder to find; when it flourishes, so do the rushes. The river, the Coorong, the sea and the lake are the four waters of the Ngarrindjeri and are all connected. Weaving is vital to Ngarrindjeri culture, it sustains us.’