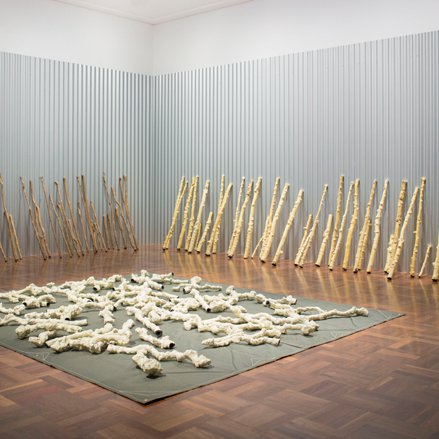 Born 1984 in Sydney, Australia
Lives and works in Sydney and itinerant

Yasmin Smith works within the parameters of ceramics, creating site-specific installations driven by extensive research. Merging aspects of art, archaeology and science, she examines the processes and chemical composition of glazes made from material found on site to reveal the history, ecology, geology and culture of a place.

Drowned River Valley, 2018, is a major new work in which Smith focuses on Cockatoo Island’s location, marking the border between the salty waters of Sydney Harbour and the less saline waters of the Parramatta River system. In 2016, Smith became interested in the history of salt production in New South Wales and salt glazing techniques. A chemical compound essential to the existence of life, salt has been a valuable resource integral to science, economics, anthropology, archaeology, geology, hydrology, spirituality and politics throughout history and across cultures. The compound also bears significance of a more cosmological nature.

Presented at two separate locations on Cockatoo Island, Drowned River Valley examines the local presence of salt harvested from harbour/river tidal exchange water around the Island as well as in the ash of Avicennia marina (grey mangrove). Avicennia marina is a plant adapted to living in the saline conditions of the intertidal zone along the further reaches of the Parramatta River. Smith’s intensive material gathering process began in mid-2017 with the collection of salt water from the slipway next to the chimney on Cockatoo Island. She also collected mangrove wood with permission from local councils, taken from endangered salt marsh areas undergoing regeneration programs. At the south end of Cockatoo Island, Smith has created a functioning studio with an outdoor kiln and salt farm where the visiting public can contribute their labour to the production of clay vessels for salt harvesting.

Smith’s multilayered project employs a variety of elements and interconnected production processes. Mangrove wood and railway sleepers from the industrial history of the Island are burned in a furnace to create heat to evaporate the salt. Ash from these processes is used to produce wood ash glazes applied to ceramic casts of corresponding timber forms. Salt from the furnace is used in the kiln to glaze the harvesting vessels. The visual outcomes of the glazes bring together Smith’s research with the ceramic objects, culminating in an installation displayed in the former Timber Drying Store.

Commissioned by the Biennale of Sydney with assistance from Neil and Karina Hobbs; and Merran Morrison; and the Australia Council for the Arts