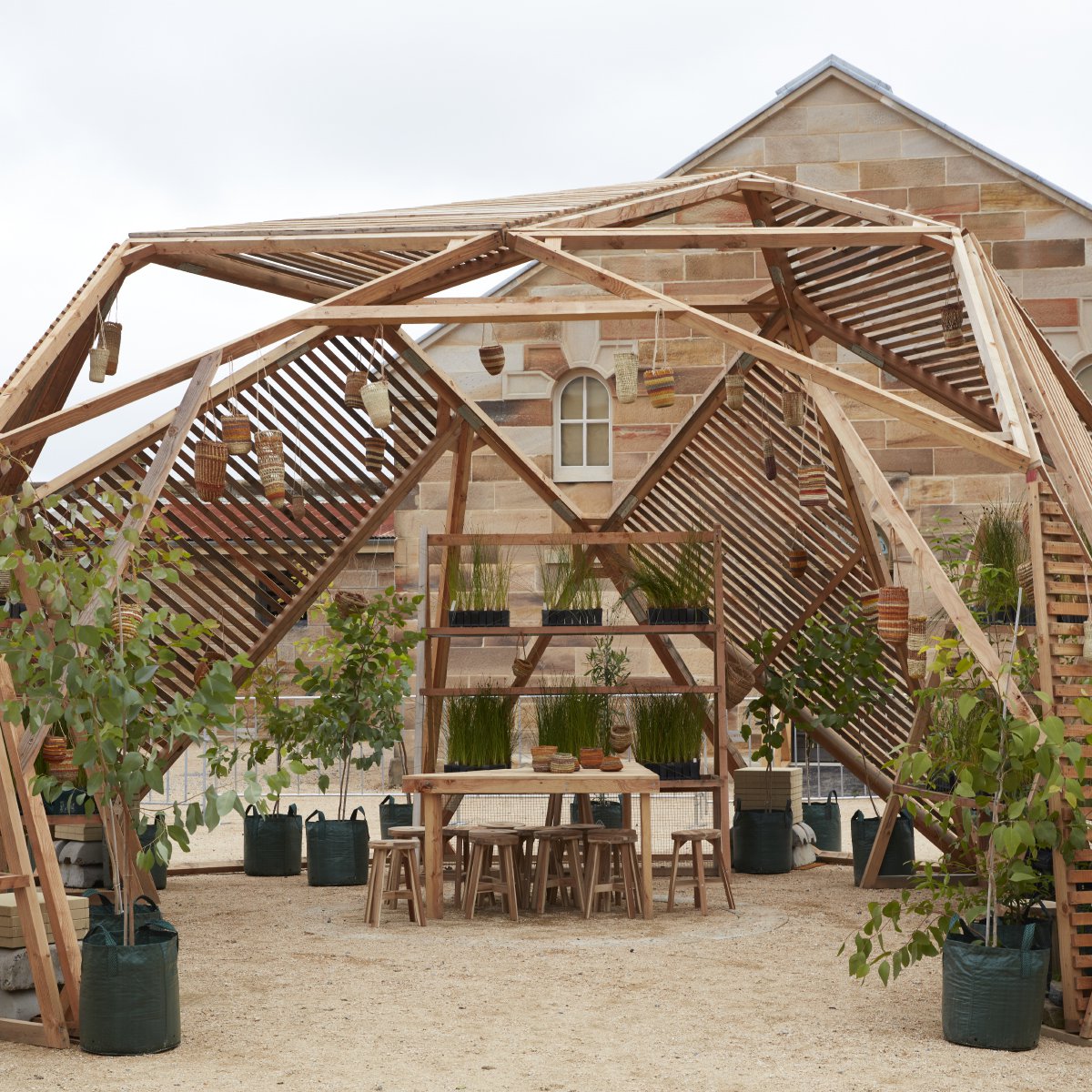 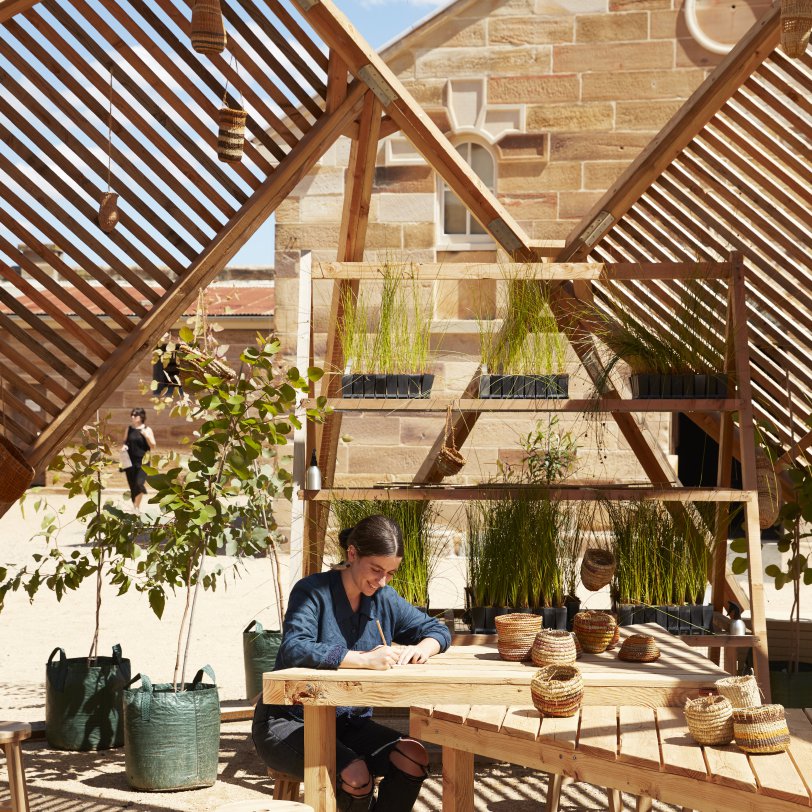 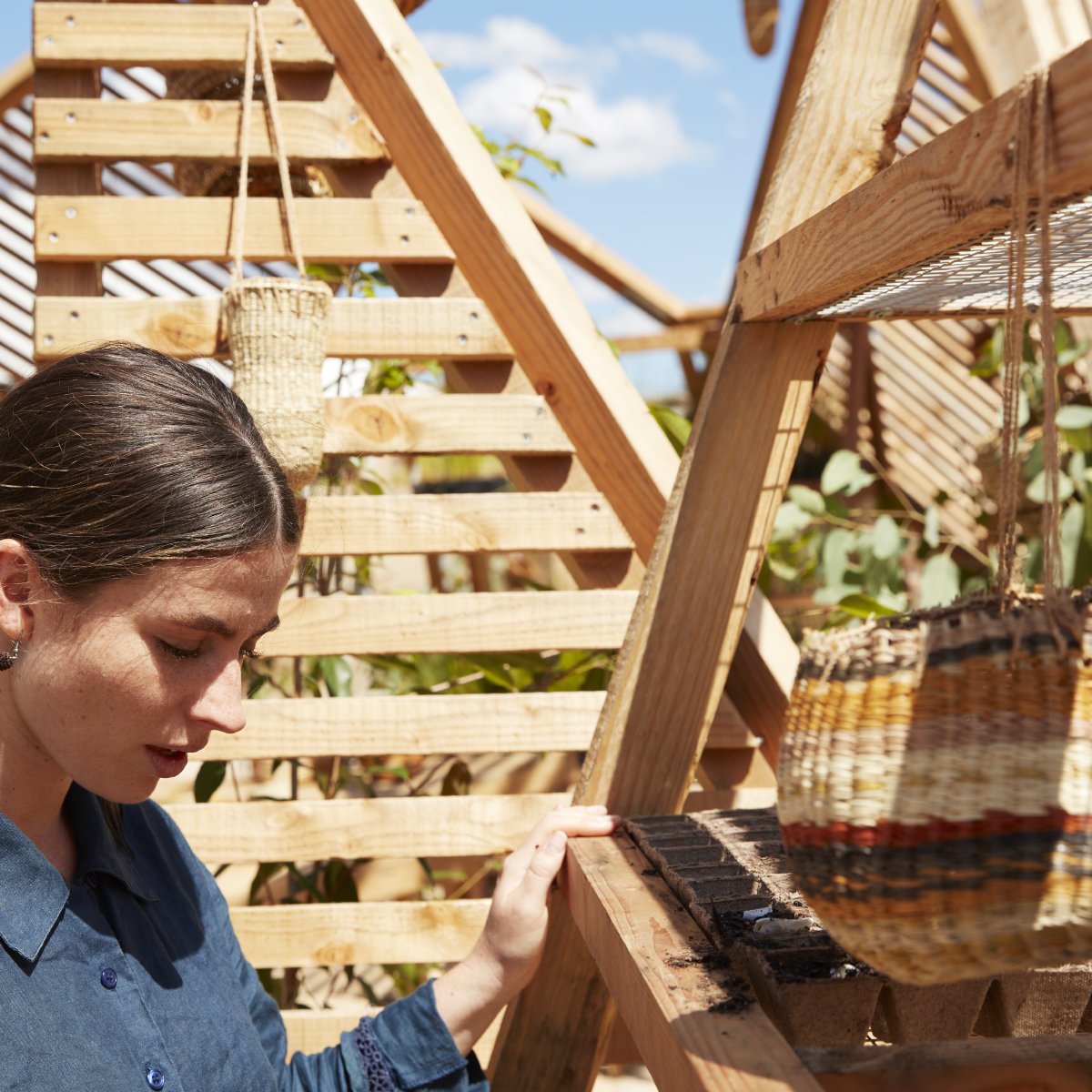 Born 1981 in Townsville, Australia
Lives and works in Sydney, Australia

“We carry the responsibility for continuing to care for and look after the land upon which we live. Take a moment to connect with this site; consider that this place has an active memory. As you stand here, you are its most recent memory and part of a contemporary ceremony, an action and process marking the beginning of change.”

Albert’s work for the 22nd Biennale of Sydney, Healing Land, Remembering Country, is a new gesture of ‘memory exchange’. Presented as a sustainable greenhouse at Cockatoo Island, the work poses important questions such as: how do we remember, give justice to, and rewrite complex and traumatic histories? It is a continuation of Albert’s practice where the artist engages with sites of historical and inter-generational trauma. The artist invites us all to engage with the histories of place by inviting members of the public to share memories on paper imbedded with local seeds, which in turn are used to heal the land and our memories. The greenhouse is intended to act as a site for reflection, writing, sharing, and healing. Baskets made by Indigenous artists from across Australia act as the vessels to hold and care for people’s gifted memories. Surrounded by former convict prison buildings, Healing Land, Remembering Country creates a moment for pause and reflection, within a place of new growth. Connecting the multi-layered histories of this site to others, the seeded paper will be planted at different locations to re-generate flora.

For the 22nd Biennale of Sydney, Tony Albert has also worked with members of Seed Indigenous Youth Climate Network, a movement driven by young Aboriginal and Torres Strait Islander people in the name of climate justice to create a series of banners presented at Cockatoo Island and at the Museum of Contemporary Art Australia. The banners come from Albert’s ongoing practice of opening up his studio to engage and collaborate with different communities and movements. The banners both challenge and assert interconnected issues of land, sovereignty, protest, environmental devastation and the mass extraction of earth’s resources.

Connecting another site of historical incarceration, the National Art School (formerly the Darlingurst Gaol), Brothers (The Prodigal Son) is a site-specific work which responds to a window in the nearby chapel building depicting the prodigal son. Albert has incorporated one of his own references to the holy trinity – drawn from his work Brothers a series of photographs of young Indigenous men who were staying at Kirinari Hostel. The images were inspired by an incident where Albert saw teenagers at a rally protesting an instance of police brutality in Kings Cross, Sydney. The demonstrators painted their chests with a red target as an act of protest. Placed outdoors, this window memorialises another story of heroic figures, enshrining a beautiful act of defiance, and imbedding a local Indigenous story at this site.

Tony Albert’s practice explores contemporary legacies of colonialism in ways which prompt audiences to contemplate elements of the human condition. Mining imagery and source material from across the globe, Albert draws on both personal and collective histories to explore the ways in which optimism might be utilised to overcome adversity. His practice is concerned with identity and the ascribing of social labels; unpacking what it means to judge and be judged in the absence of recognition or understanding.

Commissioned by the Biennale of Sydney with generous support from the Australia Council for the Arts and Create NSW, and generous assistance from The Medich Foundation

Brothers was fabricated with the assistance of Australia Council for the Arts and Canberra Glassworks. Courtesy the artist and Sullivan+Strumpf, Sydney.

Tony Albert, Do Not Frack the NT, 2020, house paint on banner. Commissioned by the Biennale of Sydney with generous support from the Australia Council for the Arts and Create NSW and generous assistance from the Medich Foundation. Courtesy the artist and Sullivan+Strumpf, Sydney

Tony Albert, Brothers (The Prodigal Son), 2020, glass, lead, photographic decal, steel, stone. Commissioned by the Biennale of Sydney with generous support from the Australia Council for the Arts, and Create NSW, and generous assistance from The Medich Foundation. Courtesy the artist and Sullivan+Strumpf, Sydney. Fabricated with the assistance of Australia Council for the Arts and Canberra Glassworks