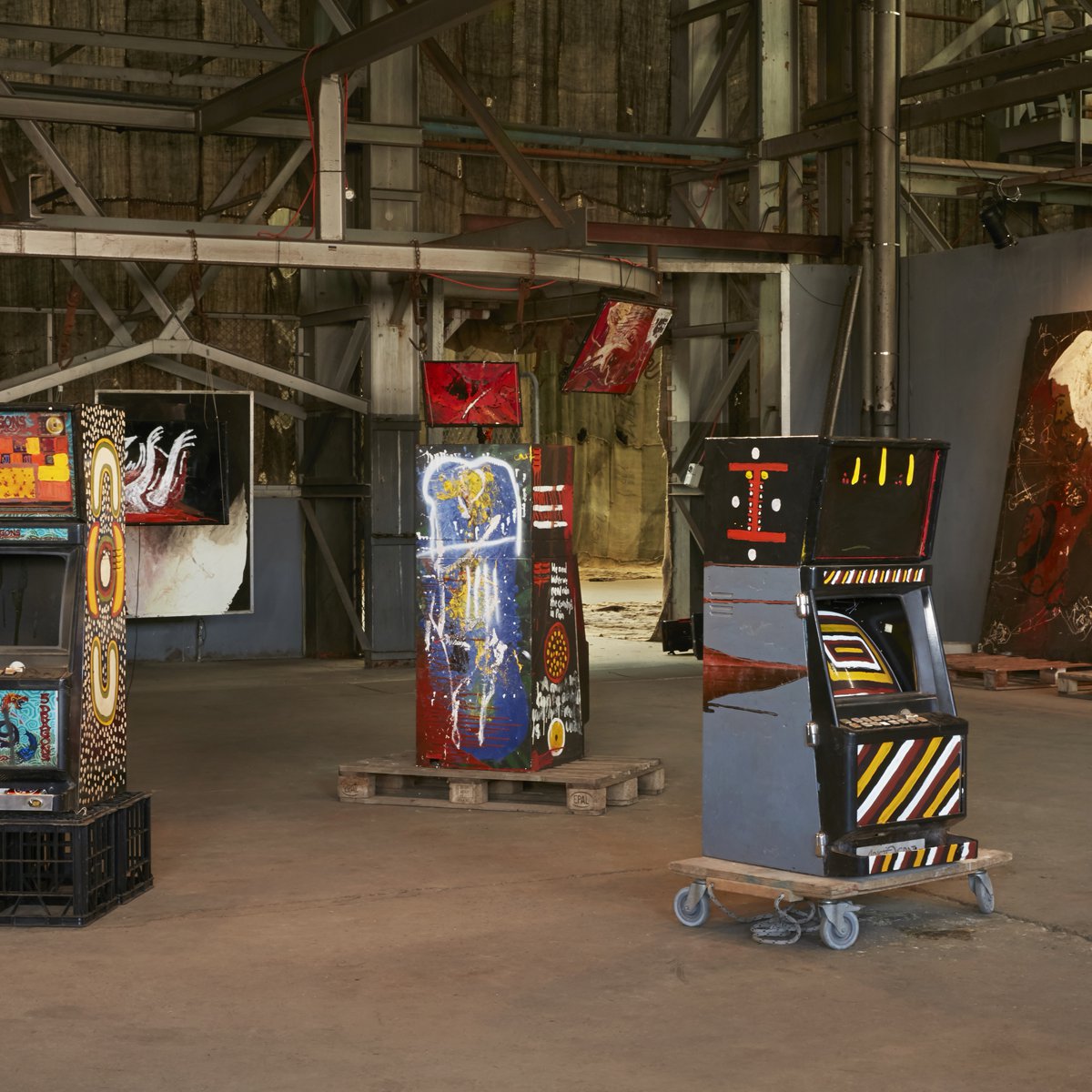 
The Italian word brio means mettle, fire, or vivacity of style or performance. It expresses the energetic, experimental and transformative spirit of the Tennant Creek Brio, whose collective work is a dynamic interplay of influences including Aboriginal desert traditions, abstract expressionism, action painting, found or junk art, street art and art activism.

The Tennant Creek Brio is an artist collective based in the Barkly regional town of Tennant Creek, (population 3,200) which is located in Warumungu country in the Northern Territory. The collective began in 2016 as an Aboriginal men’s art therapy program through Anyinginyi Aboriginal Health Organisation to help men with issues of alcohol and substance misuse. Under the direction of artist Rupert Betheras and supported by fellow artist Fabian Brown, Joseph Williams and the more senior David Duggie, the collective quickly gained traction amongst local men. The collective soon grew its core membership to include Marcus Camphoo, Simon Wilson, Lindsay Nelson, Clifford Thompson, Matthew Ladd and Joseph Williams alongside several occasional members and fellow travellers. By 2018, the art therapy program had moved out of Anyinginyi and under Nyinkka Nyunyu, the Tennant Creek’s art and culture centre, where the collective was joined by artist Jimmy Frank.

Each artist had been exposed to various traditional forms of cultural expression, i.e. sand, rock and body painting, along with canvas, print, TV, film, social media and religious and protest imagery before joining the Brio. The seeds of Brown’s iconic figurative style, for instance, were planted when he was young, producing sketches on the walls of his childhood dwellings. As a teenager, Williams learnt to carve from his grandfather, while Wilson also developed an interest in painting during his teens. Additionally, Betheras’ early teenage years were marked by Melbourne 1980s graffiti subculture. The artists share a rebellious streak and commitment to unsettling the status quo born from a shared experience of outsider status.

Working collectively, the artists are also challenged to reinvigorate their individual practices through exposure to new materials and mediums, and through new approaches that are collaborative and dialogical. No individual’s authorship necessarily takes priority over the others. At times one artist might finish the work of another through reimagining the intentions and possibilities of their art in the act of both making and presenting their work. While the collective remains true to its art therapy origins, it has also developed a significant social and cultural voice reflecting on the rigours of life in a frontier town that remains marred by the ongoing impacts of colonisation and the unending struggle to maintain cultural identity. Some of the collective’s ‘found’ materials – such as disused metal, plan drawings from a nearby abandoned mine site, and disused poker machinespotently feed into the force of this commentary and outsider status.

Following their debut exhibition in 2016 at Nyinkka Nyunyu, in 2017 the Brio’s exhibition ‘Present Tense: Tennant Creek Men’s Centre Art’ was held at the Northern Centre for Contemporary Art in Darwin, garnering, albeit limited, acclaim. In 2019, the Brio exhibited ‘King of the Roosters’ at Raft Artspace, Alice Springs and also ‘Wanjjal Payinti’ (Past and Present) as part of the 2019 ‘Desert Mob’ group exhibition, Alice Springs.