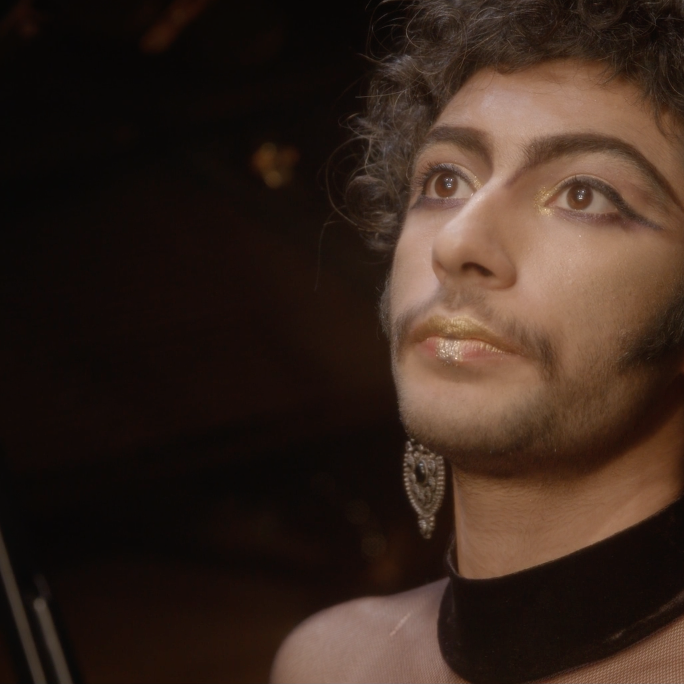 Born 1992 in Châtellerault, France
Lives and Works in Paris, France

Tarek Lakhrissi is a interdisciplinary artist and poet who works on the performativity of language through poetry, research and experimentations.

Tarek Lakhrissi writes poetry and develops visual content aiming to challenge language and reflect upon the codification of affects through fiction.

For the 22nd Biennale of Sydney, he presents a cinematic installation of his work Out of the Blue at the Museum of Contemporary Art Australia. Lighting design plays an important role in the work, and the artist plays with different shades of blue inspired by American playwright Robert Wilson to expand upon the world of the film. Out of the Blue takes place at a radical moment in time, in which the politically, ideologically and economically conservative era that has come to characterise contemporary life, is coming to an end. Rather than presenting this as an apocalyptic vision, Lakhrissi’s film chooses the occasion to meditate upon the nature of transition itself, with the film’s protagonist delivering a thoughtful speech exploring ideas of freedom and liberty, responsibility, acceptance, self-determination and queer futurity to challenge popular notions about the end of the world.

Out of the Blue presents us with a transitional space of spectatorship, witnessing and performance, in which language and speech play pivotal roles in confusing, problematising and transforming established categories and binaries

Tarek Lakhrissi, Out of the Blue, 2019, single-channel digital video, colour, sound, 13:44 mins. Video produced by La Galerie CAC Noisy-le-Sec, France with the support of the Département de Seine-Saint-Denis, France. Presentation at the 22nd Biennale of Sydney was made possible with assistance from the Consulate General of France in Sydney. Courtesy the artist