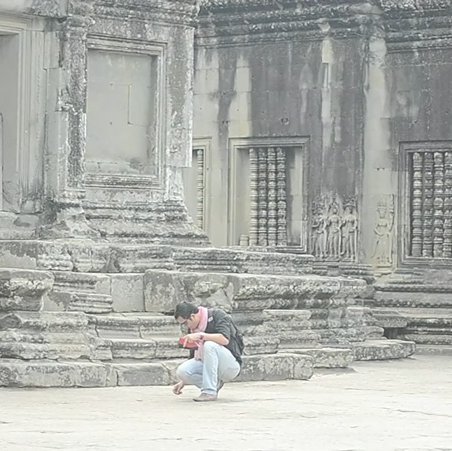 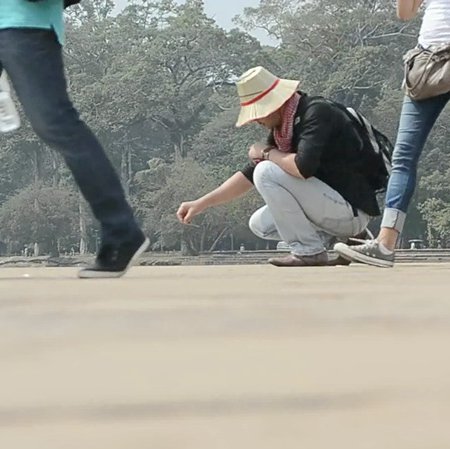 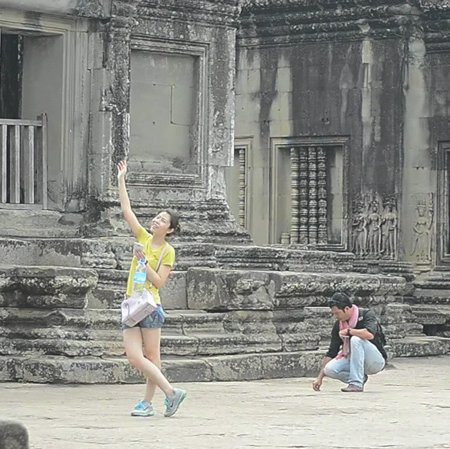 Born in Cambodia during a time of hostility and political upheaval, Svay Sareth began making art as a teenager while living in a refugee camp located near the Thai-Cambodian border. Drawing on personal experience, Svay works across the mediums of sculpture, installation and performance, creating artworks that examine some of the many facets of war: violence, power, fear, resistance, futility, loss and survival. As a teenager living through civil war and the aftermath of conflict, making art became a way for Svay to document the violence of everyday life, and a means to dream of a better world.

Svay’s artworks often repurpose simple objects from everyday life as a means to investigate and confront contemporary issues within and beyond Cambodia’s borders. At the Museum of Contemporary Art Australia, Svay presents Prendre les Mesures, 2015, a single-channel video work that features documentary footage of a durational performance the artist conducted at Angkor Wat in Cambodia. Using a large needle, a tool traditionally used to mend damaged rice sacks after they weaken from overuse or are gnawed and damaged by invading vermin, Svay measured the length of the causeway at the entrance to the temple complex, which is regarded as the largest religious monument in the world. Alongside the video work, Svay also exhibits the needle he used as a measuring device in the performance.

The title of the work, which means ‘to take measures’ in French, is a double entendre. The literal interpretation is ‘to measure something’, but it can also be understood as ‘to take necessary measures to address a situation’. Svay’s performance, some 7315 needle lengths and eight hours’ duration, speaks to both meanings. While Angkor Wat has been a spiritual location of great significance, Svay calls attention to the expropriation of the temple by varying powers over time, from the colonial-era establishment of an archaeological park, to more recent concessions of ticket sales to private companies, and the ever-present masses of tourists.

Presentation at the 21st Biennale of Sydney was made possible with assistance from Reliable Source Industrial (Cambodia) Co., Ltd and the Australia-ASEAN Council of the Department of Foreign Affairs and Trade

Svay Sareth, Prendre les Mesures, 2015, single-channel HD video, colour, sound, needle, archival material, 65:25 mins. Presentation at the 21st Biennale of Sydney was made possible with assistance from Reliable Source Industrial (Cambodia) Co., Ltd and the Australia-ASEAN Council of the Department of Foreign Affairs and Trade. Installation view of the 21st Biennale of Sydney (2018) at the Museum of Contemporary Art Australia. Courtesy the artist and SA SA BASSAC, Phnom Penh