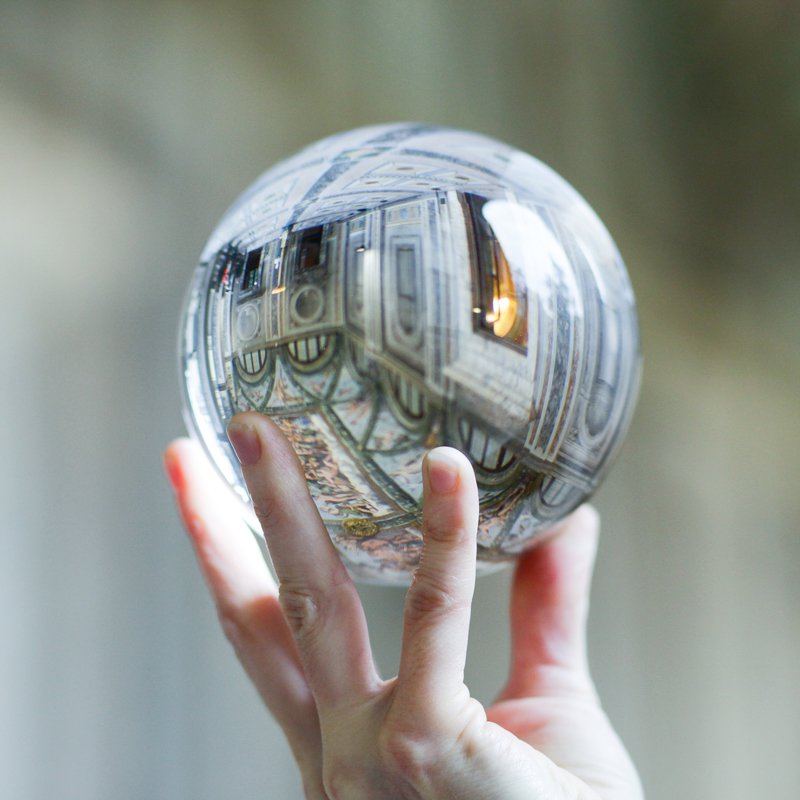 A classically trained cellist, Su-Mei Tse grew up in a culturally diverse and musically rich environment as the daughter of a Chinese violinist father and a British pianist mother. Tse’s practice combines photography, video, installation and sculpture, often centring on music and the sonic potential of our surrounding environment. Considering sound as an expansive medium, Tse investigates the way visual acuity and auditory sensitivity can influence our perception of the world around us.

Tse’s video triptych Gewisse Rahmenbedingungen 3 (A Certain Frame Work 3), Altes Museum _ Villa Farnesina _ Villa Adriana, 2015–17, addresses altered perceptions and ways of dealing with history in a contemporary context. The three-channel video installation depicts a juggler’s hand as it playfully traverses the surface of a transparent sphere. Contact juggling, the technique used in the videos, involves the movement of balls across the body while maintaining a continued physical connection with the object.

In the orb, we see an inverted image of the surrounding environment created by the interaction of light with the transparent surface. This optical effect combined with the hypnotic movement of the hand is visually enchanting, while also reflecting the continually progressive yet cyclical nature of time. Each video was recorded at different historical sites in Europe: the neo-classical Altes Museum in Berlin, the city’s oldest museum housing an impressive collection of classical antiquities; Villa Farnesina, a Renaissance suburban villa in Rome; and Villa Adriana, built by the Emperor Hadrian in the second century in Tivoli.

These sites are skewed and transposed on to the spheres, re-situating them in a world of play and lightness. The distorted images reflected in the orbs present history as malleable, treating historical legacies with a sense of dynamism. Tse’s chosen format also hints at this reimagining of history; the triptych, a three-panelled image traditionally used as an altarpiece, is re-adopted by the artist and applied to a present-day setting. Contending with the weight of history, Tse ask us to discard our solemn attempts at preservation, encouraging a poetic rather than rigid relationship to the past.