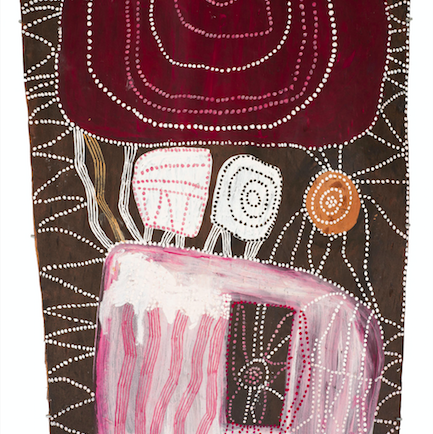 Noŋgirrŋa Marawili on the rocks at Baratjala 2015. Photograph: Annie Studd

Born on the beach at Darrpirra, North of Cape Shield, Australia on the ocean side. As a child lived wakir’ (camping / moving around) at Maḏarrpa clan-related sites between Blue Mud Bay and Groote Eyelandt, Australia
Lives and works Yirrkala and Waṉḏawuy, Australia

Marawili’s practice is grounded primarily in printmaking and painting. Her work is deeply personal, drawing inspiration not only from her ancestral heritage but also the philosophies of her own Maḏarrpa clan, without formally creating sacred designs. Hers is a painting practice that embodies the places she moves through and the people who have come before her, reflecting the philosophical shape of her reality rather than its sacred manifestation. She limits herself to using ‘the land’ to create. This is either natural media or recycled material destined for landfill. ’I paint water designs. The water. As it crashes on to the rocks at high tide. Sending the spray into the sky. Rock. Rocks which stand strong. And the waves which run and crash upon the rocks. The sea spray. This is the painting I do. You may spy on me and think that I am painting sacred things. This would be a lie.’

Baratjula is a Madarrpa clan estate adjacent to Cape Shield, where the artist camped with her father and his many wives as a young girl. It is of the essence of Madarrpa but does not hold the high order sites that Yathikpa does. Marawili lived nomadically as part of a clan group with a flotilla of canoes between Groote Eyelandt and the mainland. Her father’s name was Mundukul (Lightning Snake) and this is also the name of the serpent (also known as Water Python, Burrut’tji or Liasis Fuscus), which lives deep beneath the sea here. These are cyclonic, crocodile infested waters with huge tides and ripping currents and she is part of them.

In late 2017, Marawili made an etching with Basil Hall at Yirrkala, which used a brilliant fuschia as a component colour. In early 2018, her friend, kin sister and gallerist Beverly Knight independently queried whether Marawili wanted to respond to another Alcaston artist, Karen Mills’ recent work, which also included fuschia.

In the early months of 2018, Marawili painted a suite of paper works incorporating bright pink, which were featured in her solo show at Alcaston Gallery, Melbourne and also her major retrospective at the Art Gallery of New South Wales 'From My Heart and Mind.' Also featured in both these shows were large barks, painted in a pinkish hue drawn from mixing red and white ochres. She travelled to Sydney for the opening of her retrospective on the 17 November 2018. In the days just before leaving, she made a radical move, using a pigment obtained from discarded Magenta print toner. Surprisingly, at least a cup full of toner was released after the cartridge was smashed with a hammer. This was compliant with the long-standing edict, which artists who paint sacred designs should follow: ‘If you paint the land use the land.’ Another Yolŋu artist, Gunybi Ganambarr's practice of using industrial materials dumped on the land had already been accepted by elders. Marawili went on to paint a series of works, incorporating this magenta colour sourced from the 'empty' toner cartridges consumed by the art centre's printers and which would normally have been thrown out.

Some of the designs show a rock set deep in water, between the electric ‘curse’ that the snake spits into the sky in the form of lightning, and the spray of the sea trying to shift the immovable rock foundation of the Madarrpa. Yurr’yunna is the word used to describe the rough waves overtopping the rock and the spray flying into the sky. It is said that the serpents ‘spit’ guykthun (lightning). The meaning of guykthun extends to include ‘to make something sacred or taboo through saying magic words.’ In our language we ‘swear’ an ‘oath’ which sanctifies the speech, yet both those words can also mean to utter profanities. We also understand that ‘curse’ can mean bad language but also a spell. The Top End has one of the world’s greatest number of lightning strikes towards the end of each year. These works show the sanctifying words being spat across the sky in lightning form. The lightning’s sacred power hits the seaspray rising from where it has just smashed into the rock. The energies captured in this painting are almost a match for those in the real life of a Top End wet season.

The journey from the sacred to the descriptive shifts in these works. Marawili has reduced the law to its elements, unclothed in sacred design. Her identity cannot be separated from her art and so although she disavows any sacred intent, the echo of miny’tji persists.