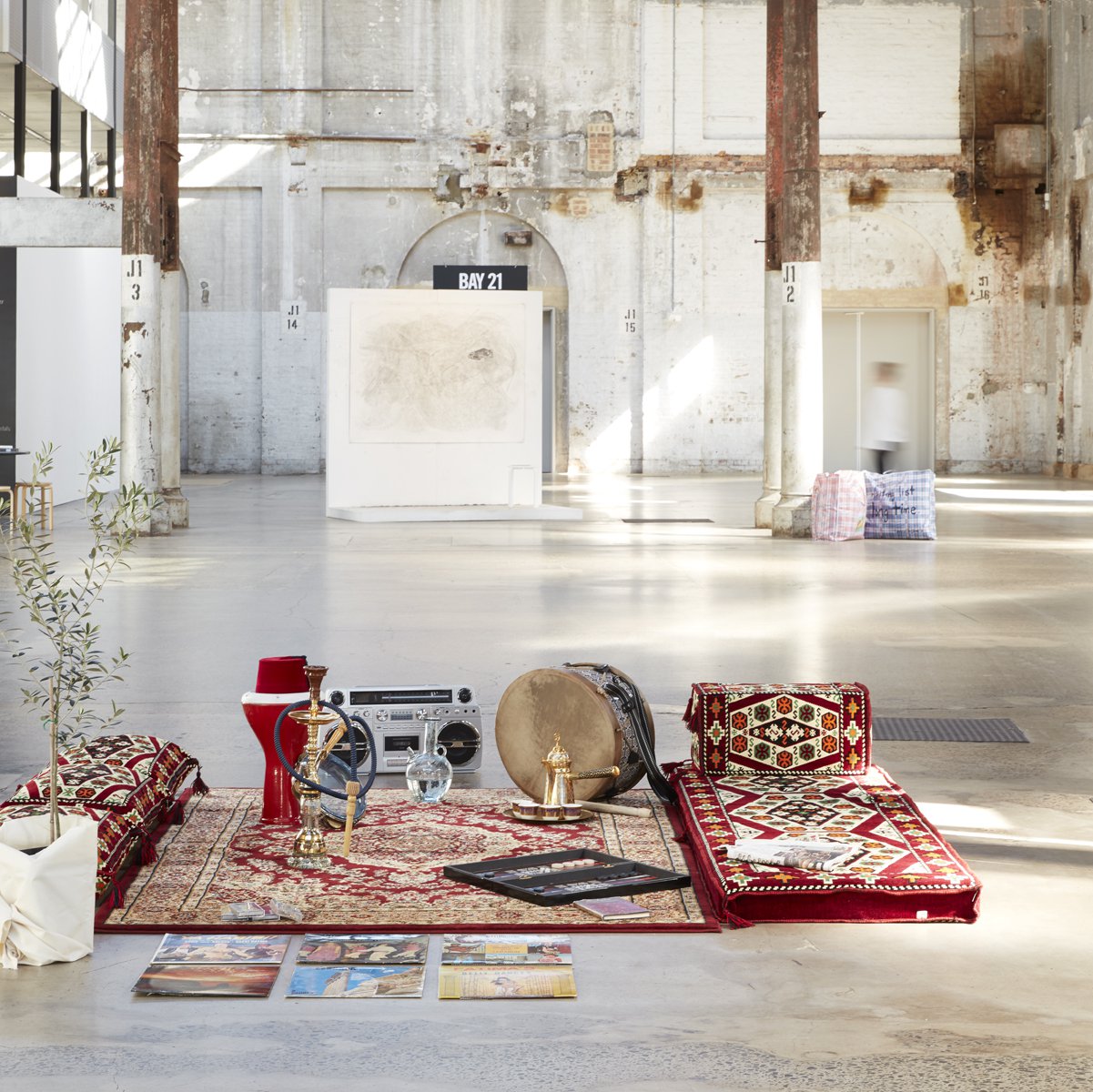 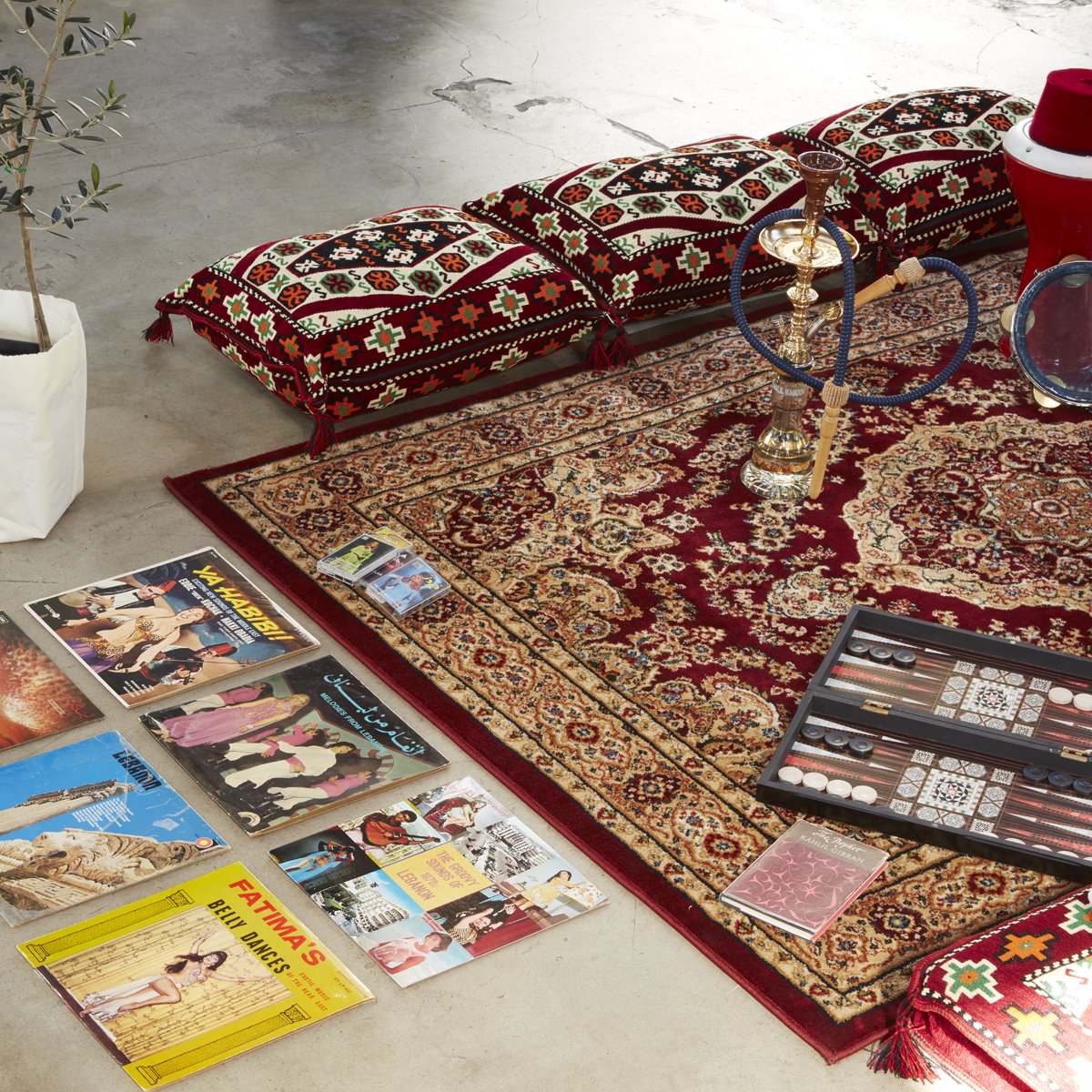 “Ahla 2u Sahla simply translates to ’welcome’ in Arabic. We say it when people come into our home. As a second-generation Lebanese residing in Australia, the importance of hospitality and welcoming people into the home was a central familial and cultural value that greatly informed my early years; and the simple act of welcoming underpins my work as a creative.

The Lebanese Civil War ended in 1990, however Lebanon has not rested. From political corruption to small wars continuing, it seems as though Lebanon does not know peace. In 2019, the revolution began due to an economic crisis and in 2020 the pandemic has forced the people back into their homes.

A form of protest during the revolution in 2019/2020 was a DJ playing off a balcony in Tripoli, demonstrating the importance of music in Lebanese culture. This work is a brief tribute to a rich musical history in the Middle East – not only Lebanon, as we listen to music from neighbouring countries including Egypt and Syria. Considering Arabic music is constantly sampled, borrowed and sometimes stolen by those from the West – and next door, it was imperative that this work represents where the music has come from and where it is taking us…”

MzRizk is a musicophile and sound artist, renowned for her ongoing contributions to Melbourne’s rich cultural and music landscape. Her many projects are a distinct blend of music knowledge, creative diversity and cultural and community engagement. As a Melbourne-based DJ, event curator and radio presenter, MzRizk brings together music-loving communities through radio, DJ slots, workshops, venue residencies, festivals, artist support and special events, while continuing to play a pivotal role in connecting music-loving folks across Australia and abroad. For NIRIN, MzRizk has created an immersive audio installation highlighting the importance of music and sound in the construct of cultural identity.

Commissioned by the Biennale of Sydney. Courtesy the artist.

For NIRIN, MzRizk created an immersive audio work highlighting the importance of music and sound in the construct of cultural identity. We asked this musicophile to create her ultimate playlist with no rules, no boundaries … and no themes.

How does a music-obsessed sound artist create a small playlist theme-free?

Without limitations, I could go anywhere and take you the listener, everywhere ... Here is a collection of songs that have either frequently visited me throughout my life or songs I have discovered and loved in the past year. It is not a list of my favourite songs in order; they are all my favourite. Musically, it makes no sense. It will either have you dancing or listening intently. I promise that you will hear music that you possibly haven't heard before, and I hope you enjoy it.

“The Star of the Orient” by Umm Kulthum makes an appearance with a 41-minute track that you so worth a listen. There are so many changes within that song that you forget it is the one song. This is the holy grail of Arabic music.

Fairuz is one of most influential singers from the Arab world, so influential that Madonna sampled her and was sued – they settled out of court. This is not that song, but “Al Bostah” from the album Wahdon, a Lebanese dancefloor disco classic. This is where she began including modern musical arrangements produced by her son Ziad Rahbani, one of the most important producers in Arabic music.

We also have a cover of the Adalusian classic poem Lamma Bada Yatathana. This is one of my favourite versions; Fairuz has also covered this.

We have songs from the post-disco, mid-80s boogie era – definitely in my top three favourite genres – mostly produced by legends like Larry Levan the DJ from Paradise Garage the iconic NYC night club.

Locals like Sampa The Great, Remi and Thando feature too. Their music packs a punch lyrically and musically, and we can't deny the brilliance of these artists. They are changing the musical landscape of this country and I am pleased to be witnessing this.

From hip hop to soul to Arabic classics to house: my playlist includes some of the most amazing songs ever made.