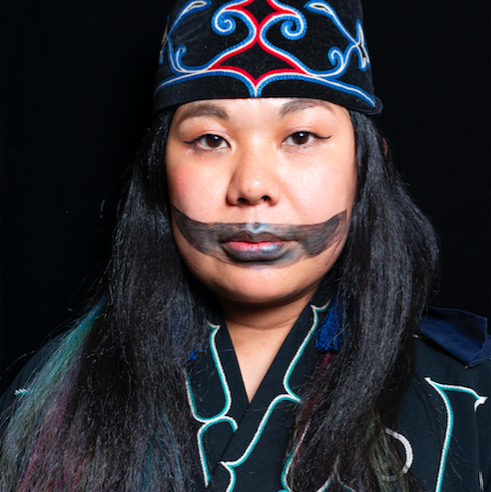 Mayunkiki is a member of ’Marewrew’, a women’s vocal group whose activities centre around the rebirth and passing on of the traditional Ainu song Upopo – a practice rooted in rhythmical patterns and the signature style of singing in a natural trance-like chorus. Mayunkiki also participates in several creative projects related to Ainu culture as an adviser / singer.

The Ainu people became oppressed after a pioneering phase in Hokkaido, Japan beginning in the 19th century, which saw harsh conditions for them under Japanese law. Because of this, in my grandparent’s generation, many Ainu people stopped practicing their culture and customs, with many Ainu families deciding not to pass these traditions onto their children. Because Ainu people can speak Japanese, in daily life, native speakers rarely exist now. Ainu language is endangered and needs to be protected.

Under these circumstances, in 2018 and with support from the Foundation for Ainu Culture, I began to research Sinuye – the traditional tattooing practice for Ainu women. Sinuye has been banned by Japanese law and the few people who paint today only do so on special occasions. In my research, I search out older Ainu people who have seen Sinuye and encourage them to recall their memories of it. My interviewees are very old and only a few of them have actually seen Sinuye in the past. I ask those few who remember it to draw Sinuye on my face as they recall it being done. Through this act I think about Ainu culture, our Ainu history and myself.