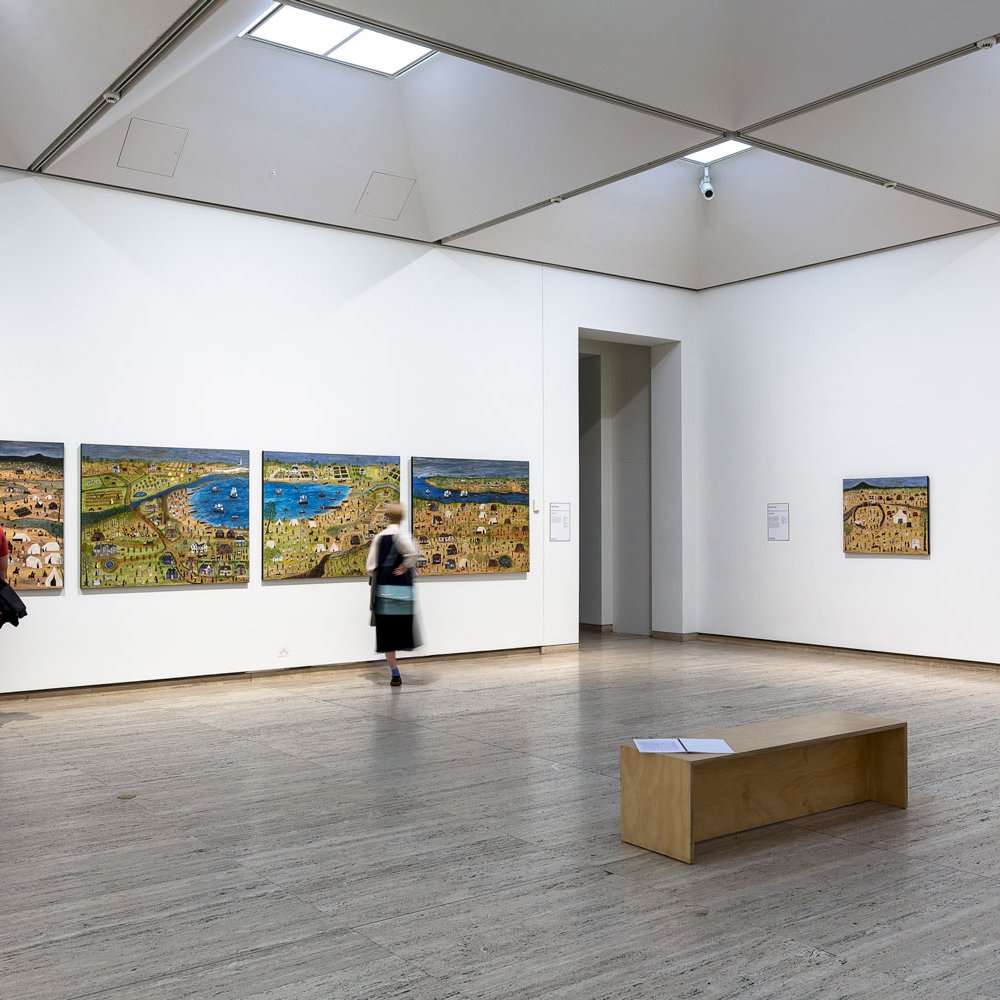 Marlene Gilson. Installation view (2018) at the Art Gallery of New South Wales for the 21st Biennale of Sydney 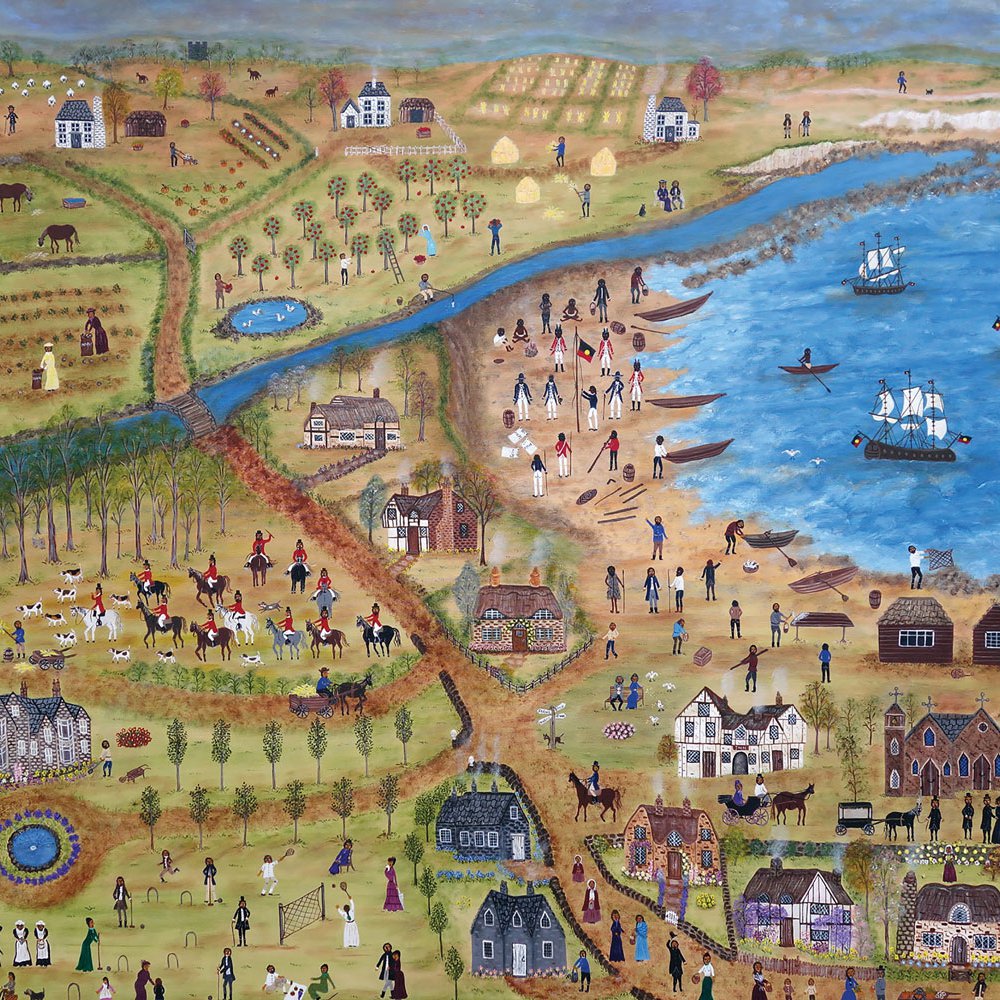 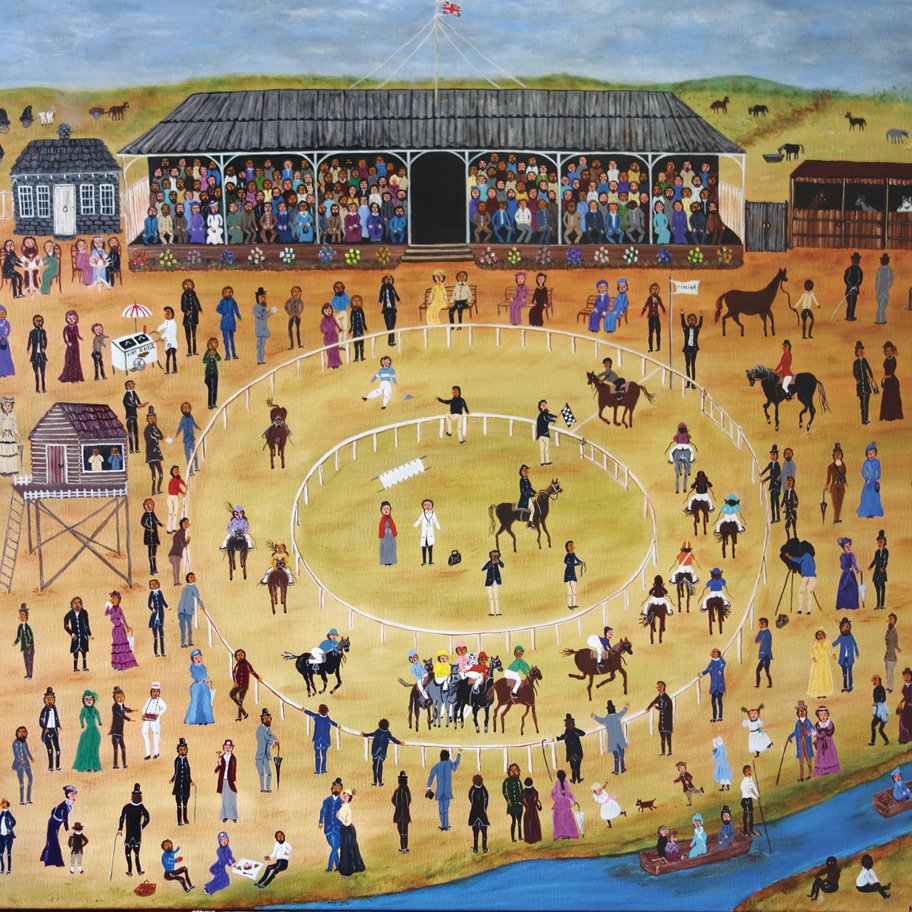 Born 1944 in Warrnambool, Victoria
Lives and works in Gordon, Victoria

Marlene Gilson’s multi-figure paintings work to overturn the colonial grasp on the past by reclaiming and re-contextualising the representation of historical events. Learning her Wathaurung history from her grandmother, Gilson began painting while recovering from an illness. The artist’s meticulously rendered works display a narrative richness and theatrical quality akin to the traditional genre of history painting. Gilson, however, privileges those stories relating to her ancestral land, which covers Ballarat, Werribee, Geelong, Skipton and the Otway Ranges in Victoria. Often including her two totems, Bunjil the Eagle and Waa the Crow, Gilson’s paintings not only reconfigure historical narratives, but display her spiritual connection to country.

Gilson is showing a series of paintings depicting historical Australian events including Captain Cook's landing at Botany Bay, 1770, and the Eureka Stockade, 3 December 1854 – a rebellion led by goldfield workers who contested the expense and administration of miners’ licences. Shifting the traditional focus of many familiar stories firmly established in the annals Australian history, Gilson brings forth the involvement of Indigenous people in significant historical events.

Jones Circus at Eureka, 2015, for instance, demonstrates Gilson’s unique merging of traditional history painting with narratives exploring the perspective of the colonised. Situated in the Ballarat diggings, the painting depicts Jones & Noble’s Circus tent, outside of which the ringmaster and several performers are shown practising their routines. Referencing a painting by Eugene von Guerard (Old Ballarat as it was in the Summer of 1853-54,1884) from the collection of the Art Gallery of Ballarat, Gilson places emphasis on the young Wathaurung men who were recruited for their skill as acrobats and riders. Her recounting of events poses an alternative to sanctioned or official chronicles, disrupting the prevailing colonial view that dominates Australian history.

Bunjil’s Final Resting Place, Race Meeting at Lal Lal Falls, 2015, also relates to a story linked to Gilson’s personal history, depicting the daily life of her ancestors and the early European settlers in the early 1900s in the small township of Lal Lal (meaning ‘dashing of waters’), near Ballarat. Once a popular tourist destination, Lal Lal was known for its spectacular waterfall and country racing program. For Wathaurung people, Lal Lal Falls is a place of great spiritual significance; it is the terrestrial home of the creator Bunjil.