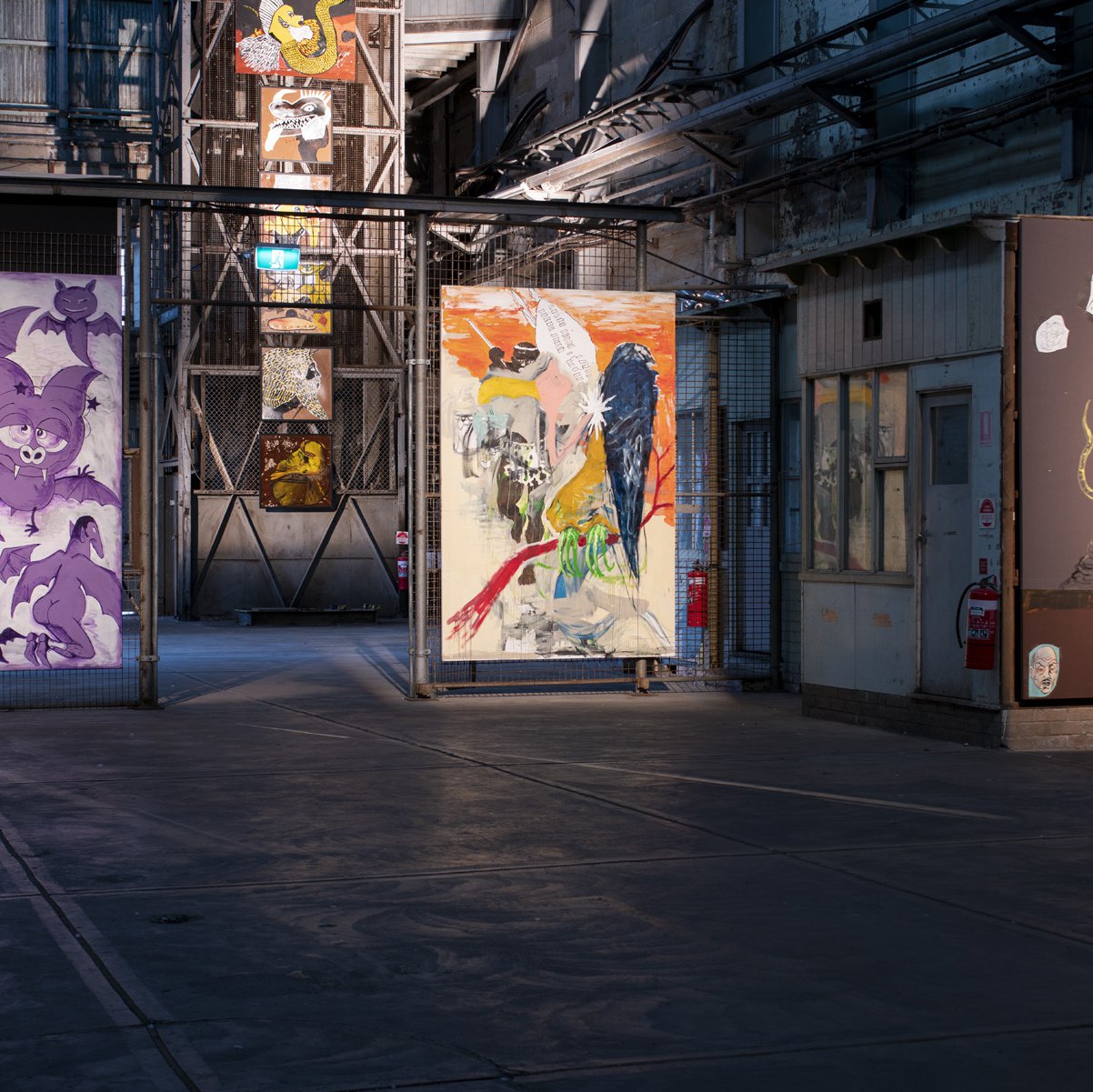 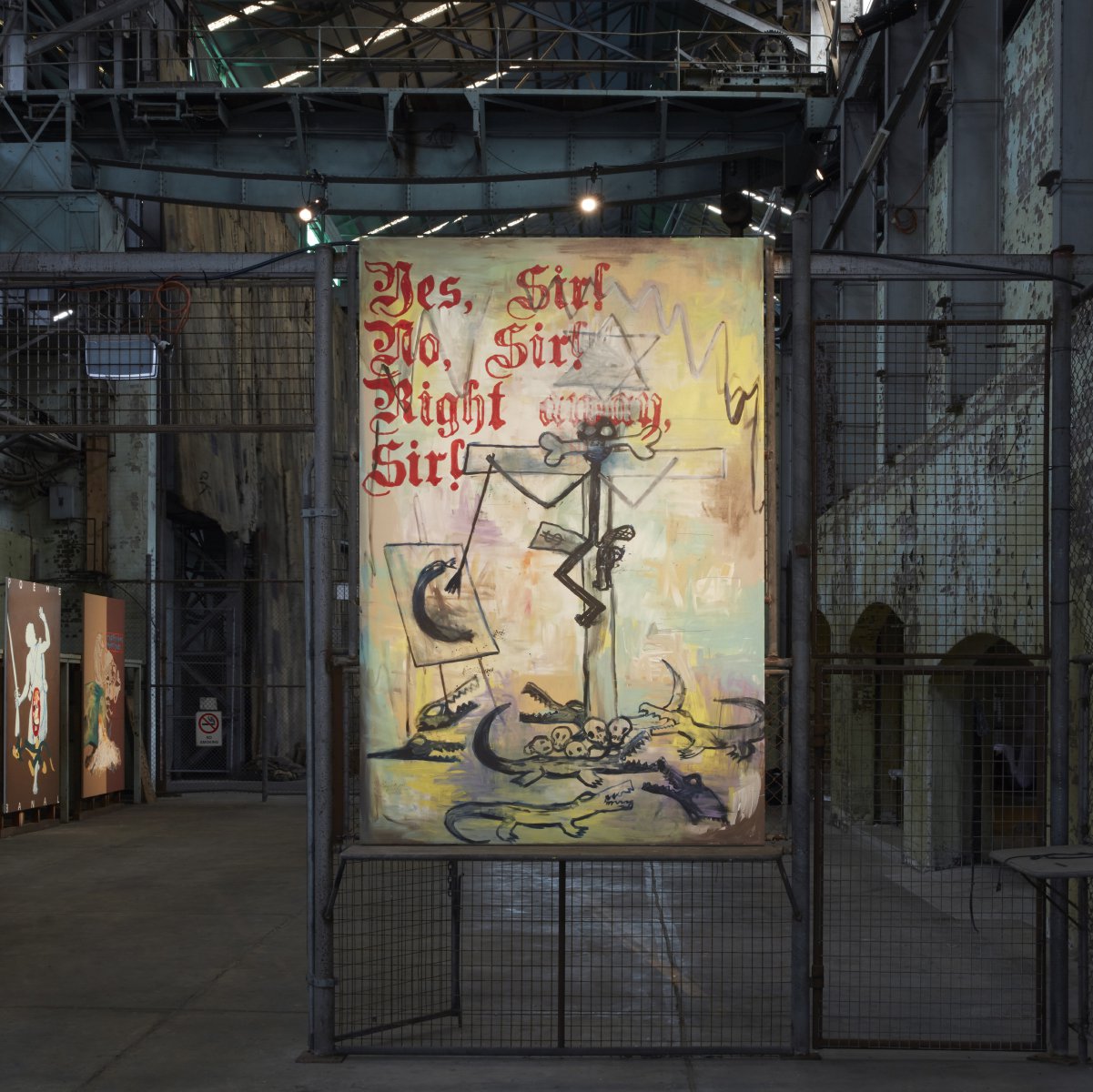 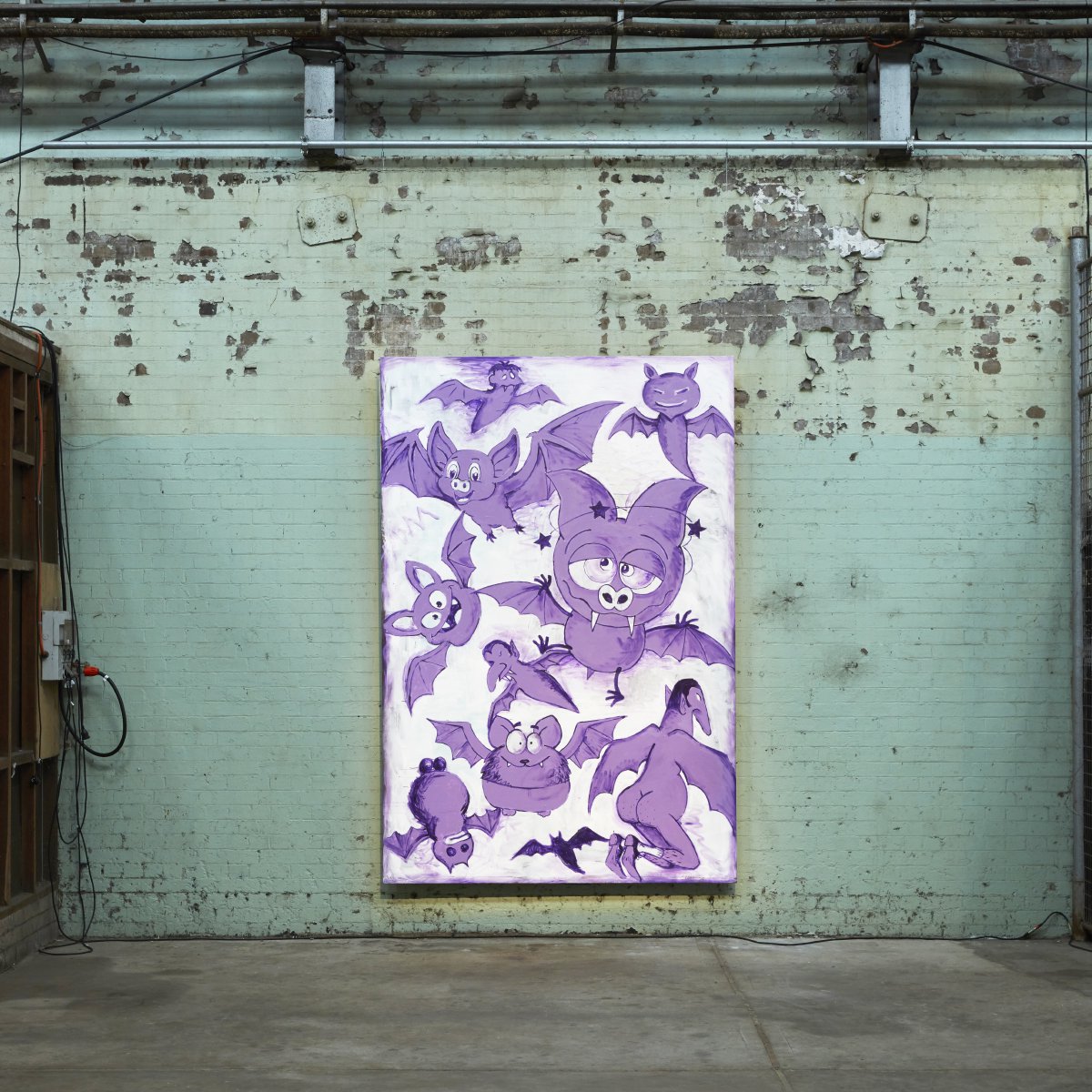 Left to Right: Manuel Ocampo; Rat Nibbling on Swastika on Top of Doubloons: from the series La Buena Vida, 2020; and As Blind as Bats Flying into the Midnight Sun (Homage to Chuck Z): from the series La Buena Vida, 2020. Installation view for the 22nd Biennale of Sydney (2020), Cockatoo Island. Commissioned by the Biennale of Sydney with assistance from Galerie Nathalie Obadia, Station Gallery, and NIRIN 500 patrons. Courtesy the artist and STATION, Australia. Photograph: Zan Wimberley. 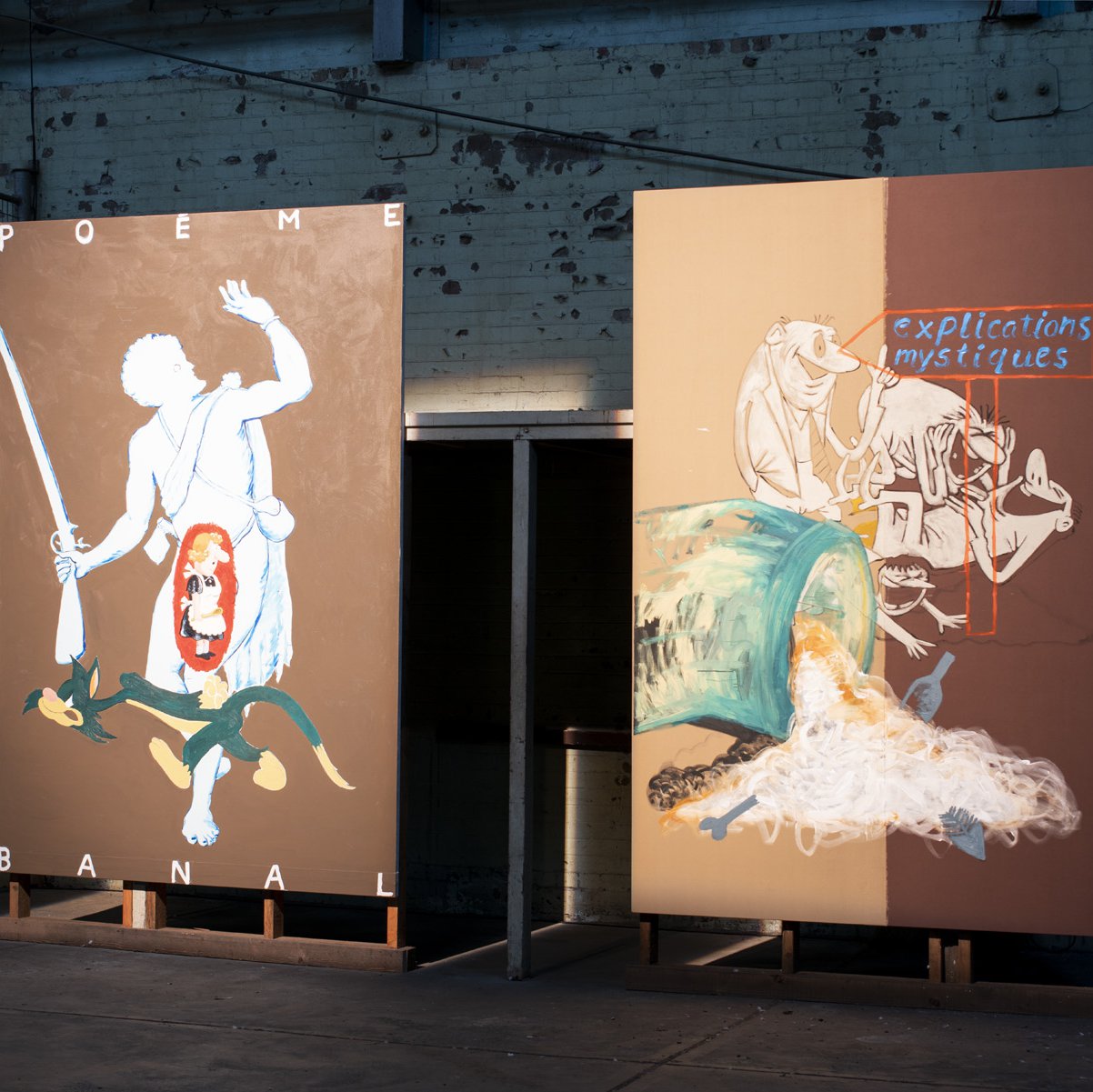 Left to Right: Manuel Ocampo; Domesticated Rebel: from the series La Buena Vida, 2020; and Breaktime at the Critical Studies Dept.: from the series La Buena Vida, 2020. Installation view for the 22nd Biennale of Sydney (2020), Cockatoo Island. Commissioned by the Biennale of Sydney with assistance from Galerie Nathalie Obadia, Station Gallery, and NIRIN 500 patrons. Courtesy the artist and STATION, Australia. Photograph: Alex Robinson.

"My paintings hang banner-like on Cockatoo Island. The imagery in the paintings is taken from different sources: from cartoons magazines and broadsheets like Judge, Puck, the Boston Globe and Life dating from the period during the Philippine-American war 1899-1902; satirical comics like MAD, Komiks, Hiwaga, Sex to Sexty; American and European modernist paintings; and Jeepney art. These combine to give each painting the feeling of a billboard announcing a macabre celebration. While being aware of using imagery that is heavily loaded, I want to use each image without giving it a permanent value. This lack of meaning adds up, as none of the imagery I employ can be read with any certainty."

The paintings of Manuel Ocampo are not stories, nor do the webs of images and symbols that he weaves together point to a specific thing. Rather, the meaning implied by the signs and visual vocabularies employed by the artist is accumulative, presented to audiences in a way that remains deliberately opaque. The artist says this method of presentation is emblematic of the way he works, from a position of uncertainty that ensures his paintings remain open to a spectrum of interpretations. Within this, Ocampo and his work are able to retain a degree of autonomy, away from any pre-conceived assumptions and desires of those who look at his work within arenas of contemporary art.

Manuel Ocampo is a painter who plays with religious and cultural symbolism and iconography. In 1985, he moved to California. In 2017, he represented the Philippines at the 57th Venice Biennale. In 2010, Ocampo started Bastards of Misrepresentation, an international exhibition series created to promote the Manila art scene. In 2003, Ocampo moved back to the Philippines and co-founded the Department of Avant-Garde Clichés Gallery and Bureau of Artistic Rehab in Manila, where he lives and works.

Commissioned by the Biennale of Sydney with assistance from Galerie Nathalie Obadia, Station Gallery, and NIRIN 500 patrons. Courtesy the artist and STATION, Australia.