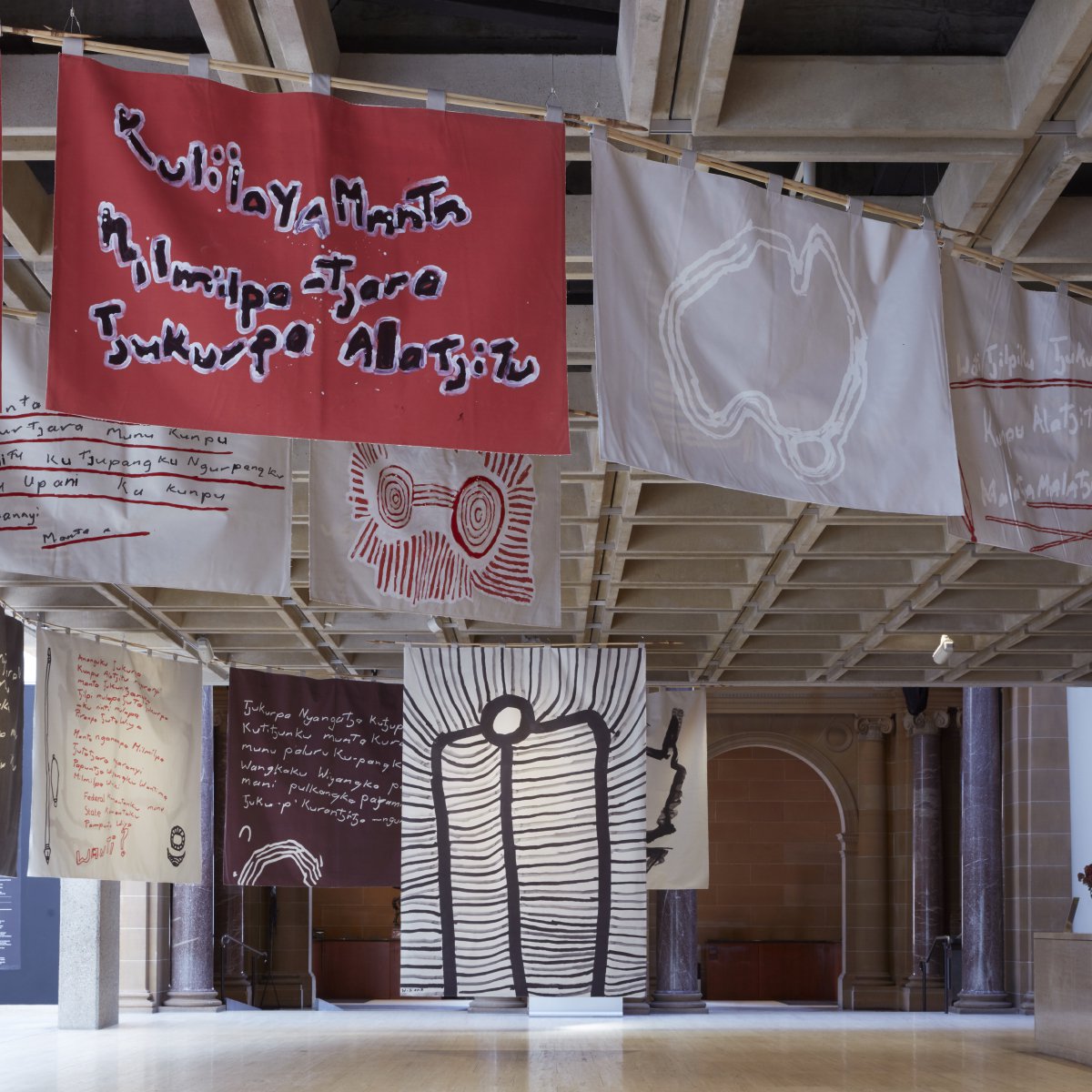 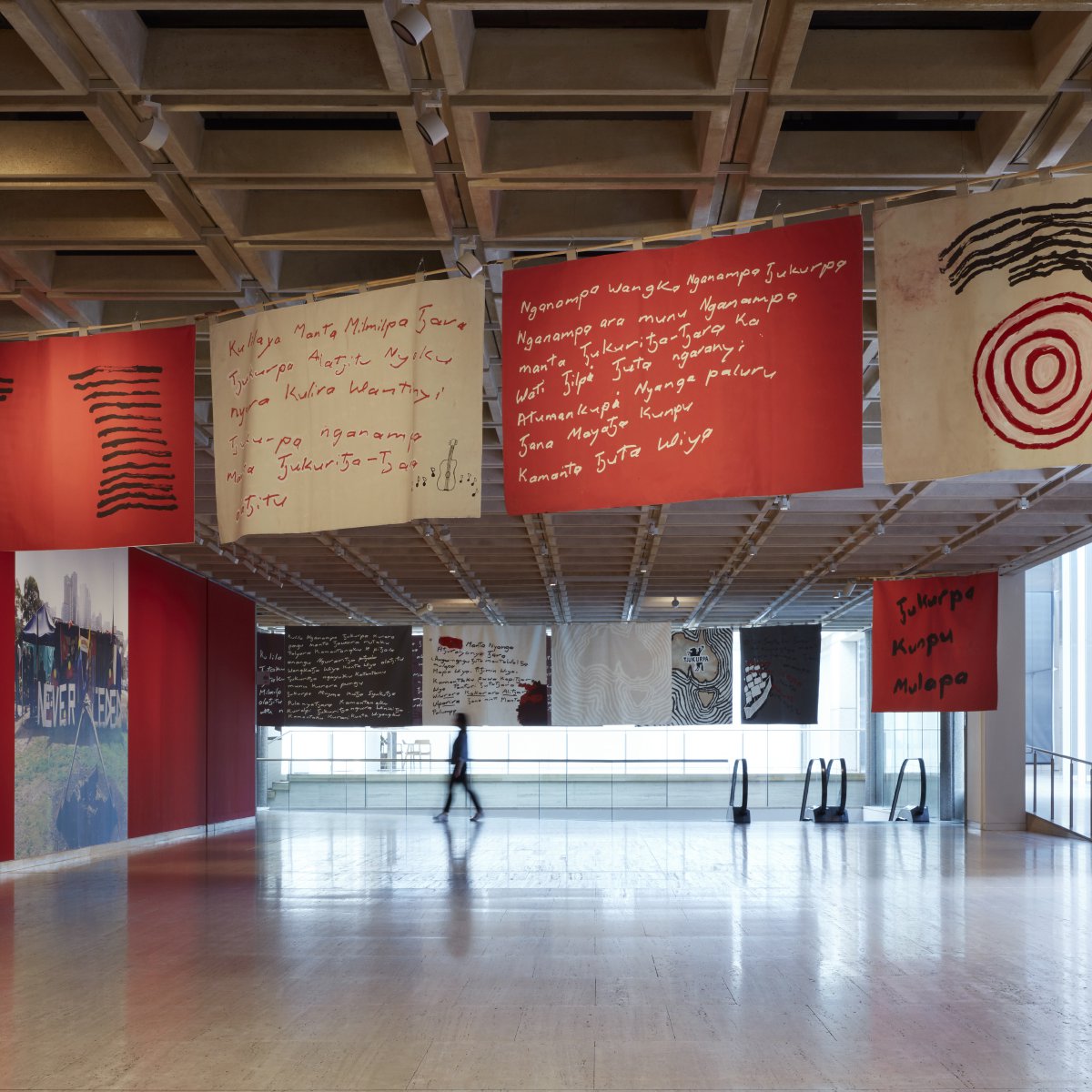 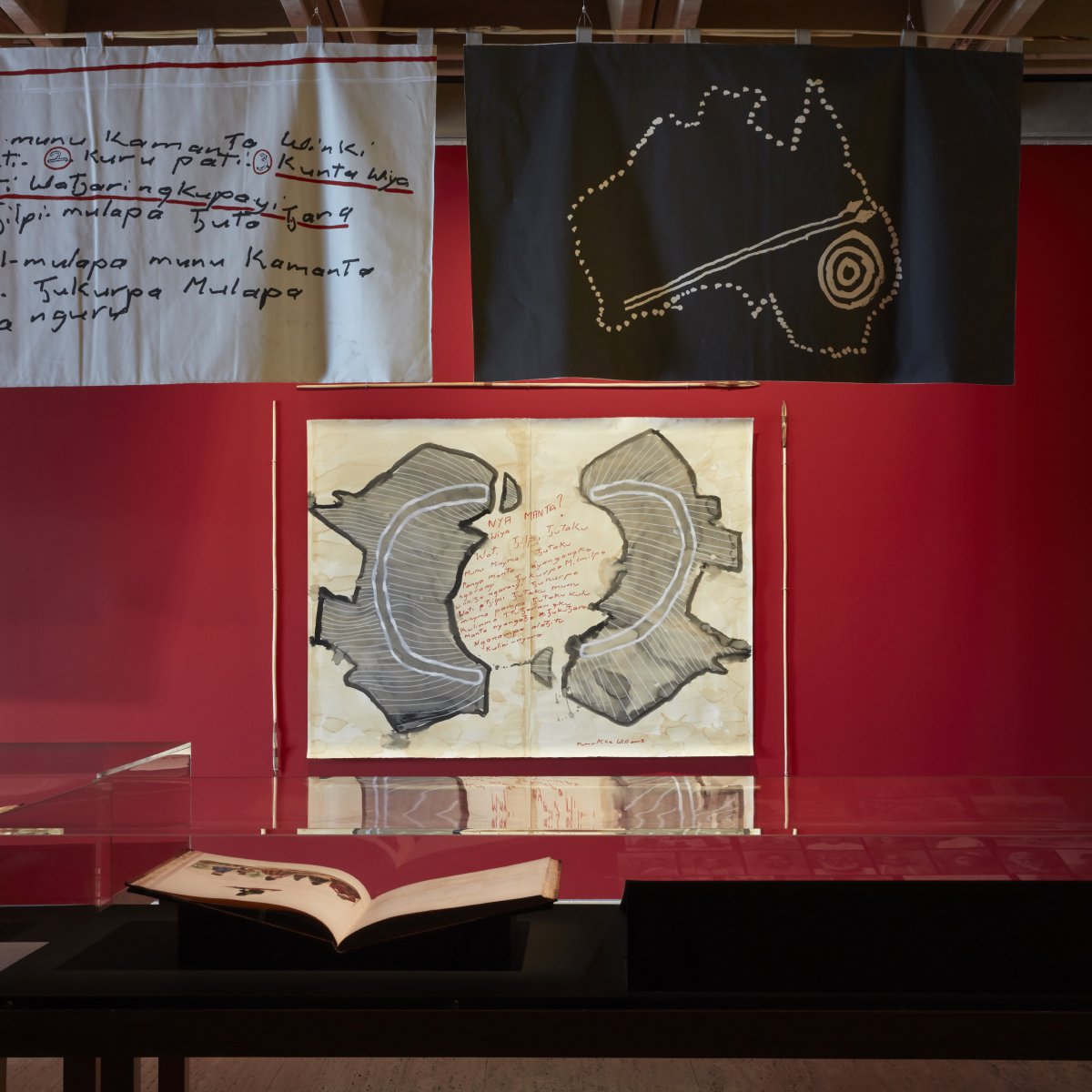 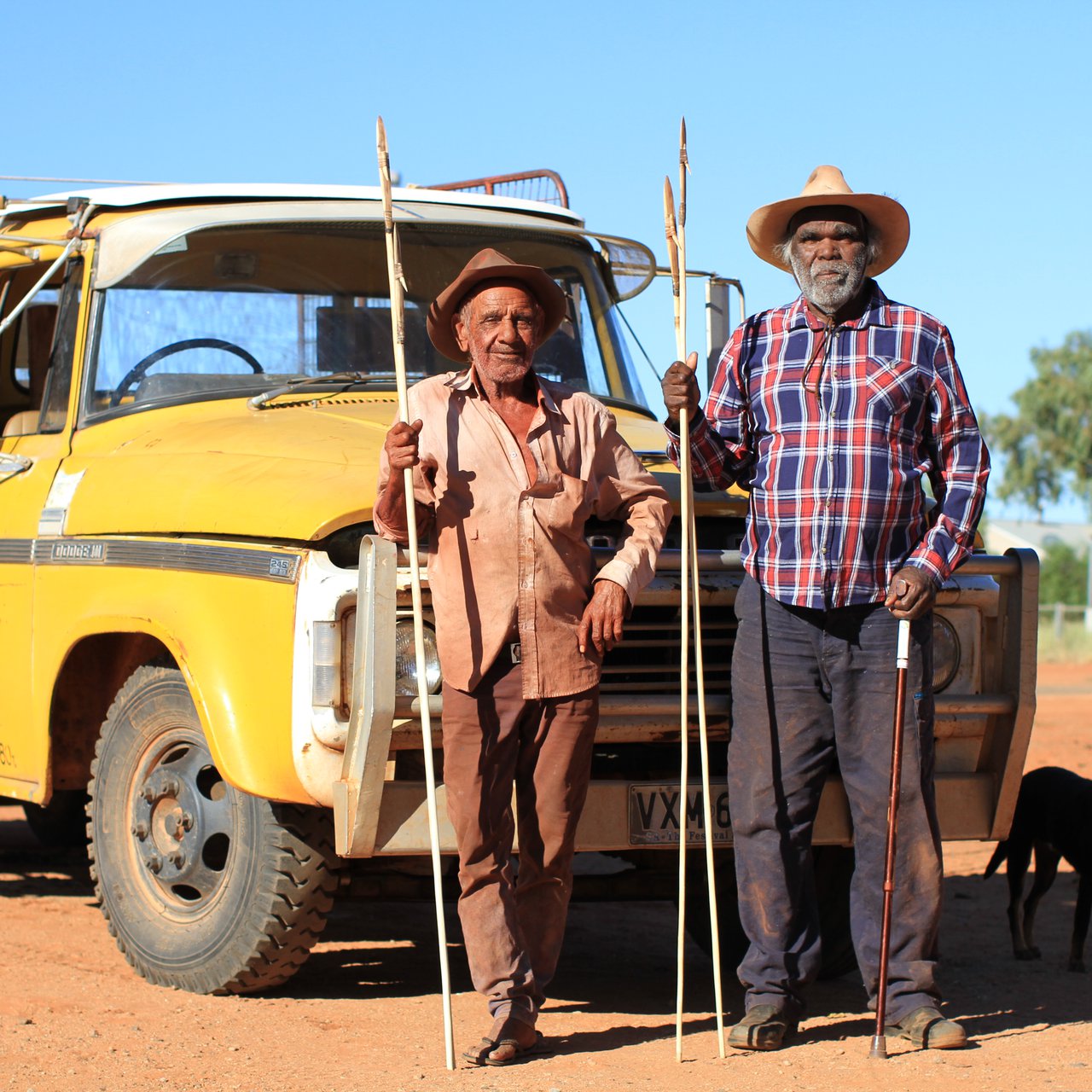 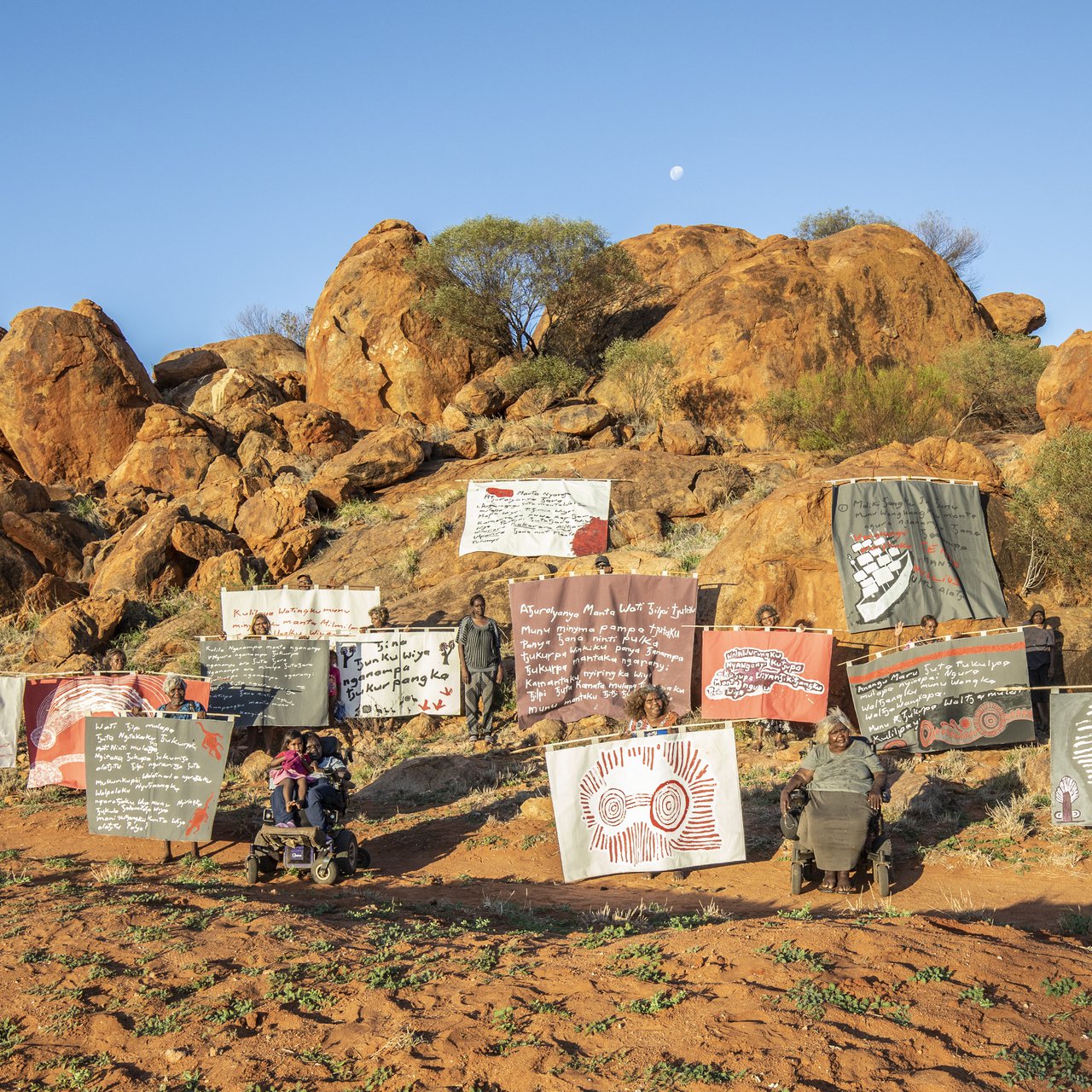 This project was executed after the artist’s passing by his collective Mimili Maku Arts, led by Tuppy Ngintja Goodwin and Sammy Dodd. All spears were made by Sammy Dodd.

“Our Tjukurpa Law is all-encompassing. It was always intended to be eternal, but we know it is at risk. This is why I am documenting it now. I want to raise people’s consciousness. I want us to be acknowledged by the wider society and the government. I am hoping to start a movement of new awareness.”

Filling the space of the entrance court of the Art Gallery of New South Wales is Kulilaya munu nintiriwa (Listen and learn), 2020 an installation of banners bearing words and images from Kunmanara Mumu Mike Williams’ personal archive, projecting his belief in the power of words to effect change. Kunmanara was planning a political protest piece for the Biennale before his passing in March 2019. The project was carried forward by his widow Tuppy Ngintja Goodwin, his lifelong friend and collaborator Sammy Dodd, and his community. Language was a central aspect of Kunmanara’s life and work as an artist, orator and activist. The banners shown were brought back to Country, gathering marks of the land, of being read, of being carried forward into the next generation.

Inside the old courts, a display of selected materials from Kunmanara Mumu Mike Williams’ archive of writings, notes and sketches gives insight into his richly varied and dynamic processes, showcasing some of the source material for his powerful words in Kulilaya munu nintiriwa (Listen and learn). A museum edition of his posthumously published book Kulinmaya! Keep listening, everybody! (2019) speaks to his communities’ desire to keep teaching his messages and pass on knowledge to future generations. An important part of Kunmanara’s work is the use of drawing and writing on found maps and appropriated Australia Post bags, reversing dominant chains of communication. Writing of the first time he used a mailbag, Kunmanara said: ‘I envisaged the mailbag being posted along on a journey, just exactly like a letter that has been written and then read. And yes, so I sent it out into the world with a message on it from me and my family.’

Nyaa Manta, 2016 by Kunmanara is considered particularly significant by his community and links to the dynamic installation of banners in the entrance court, which pays tribute to the powerful messages he conveyed through his work around land, law, culture, and the passing on of knowledge. It also forms the final image in his book Kulinmaya! Keep listening, everybody! As a concluding message it projects Kunmanara’s longstanding desire to share knowledge and raise consciousness, finishing with the question ‘Do you understand me?’

Kunmanara Mumu Mike Williams was a political activist, cultural leader and ngangkari (traditional healer). He proudly shared and protected the knowledge and duties given to him through his culture. In his art practice, he addressed issues including governance, sustainable land management and the protection of sacred heritage sites. As one of the founding members of Mimili Maku Arts on the Anangu Pitjantjatjara Yankunytjatjara Lands, his vision was to create more agency for Anangu artists, to create potent platforms for their voices to be heard.

Kulilaya munu nintiriwa (Listen and learn), 2020 is commissioned by the Biennale of Sydney with generous assistance from Fondation Opale

Selected archive materials and Nyaa Manta, 2016 presented at the 22nd Biennale of Sydney with generous assistance from Fondation Opale