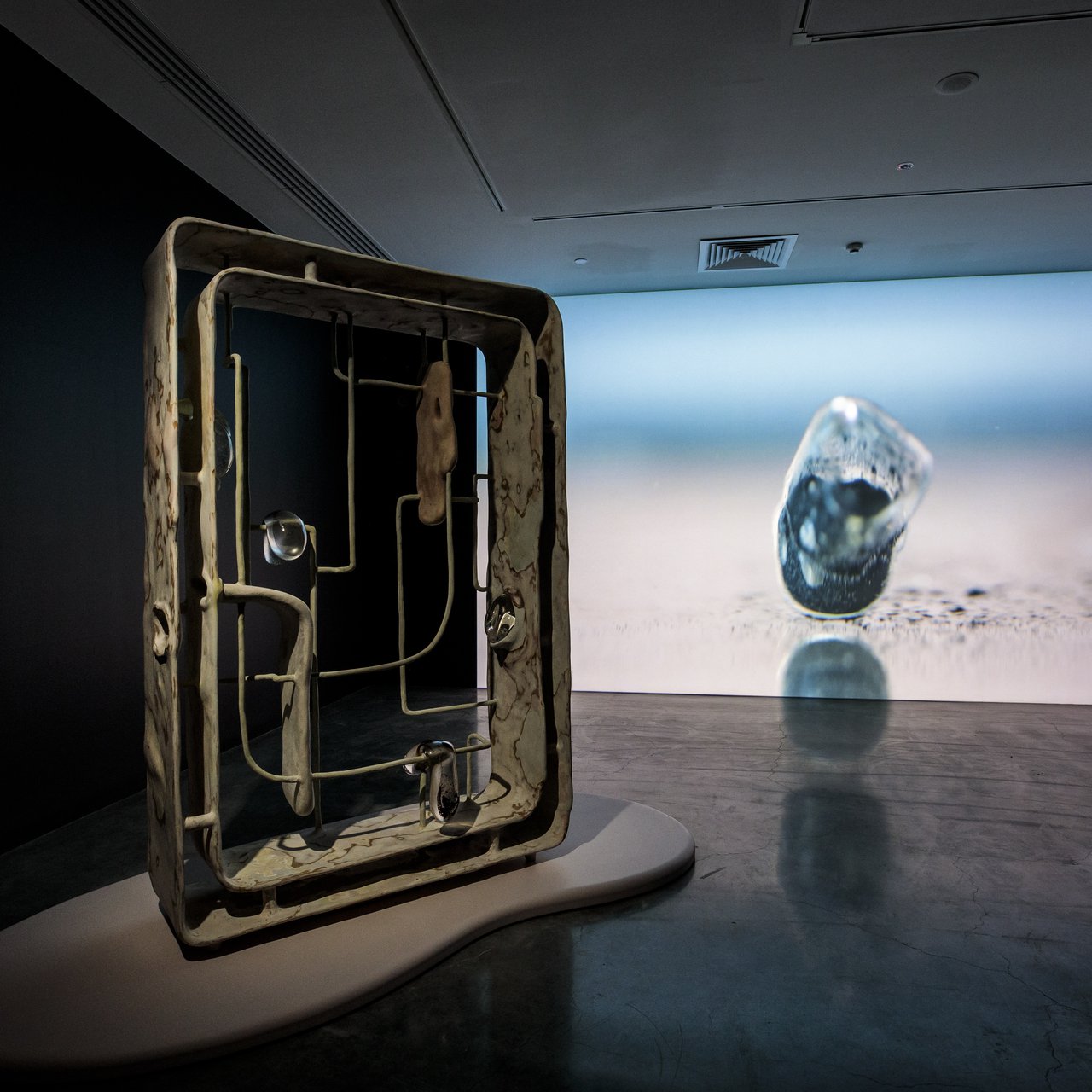 The gallery is split in half by a curtain of hanging latex, which gently bisects the space like a fleshy membrane.

The first half of the space houses two large sculptures whose forms were inspired by classical Chinese scholar’s shelves. Historically, these shelves were used by the educated elite to display their collections of objects. They functioned as something like an eastern equivalent of the cabinet of curiosities – with all of the historical baggage which such a comparison might imply. In my interpretation of these forms, the surface architecture of the shelves references an expanded illustration of the skin’s dermal layer. This smooth surface is disrupted by blobs of hand-blown glass pumped full of an array of biological substances such as: milk, blood, semen, melanin, and sex hormones. Cradled by curves and dips within the shelves, these febrile globules appear to grow up from their surfaces like pearls from the flesh of an oyster – instantiating a perverse fusion between display surface and object, viewer and viewed. The thin veil of glass allows the viewer to witness the decay of these bodily liquids, conjuring abject fears of contamination and infection, in contrast with the formalist appearance of the shelves themselves.

The second half of the gallery houses a new, single-channel video titled Xenophoria. As opposed to the more well-known term ‘xenophobia’, this word refers to a love of the foreign and is inspired by the name of a mysterious species of aquatic carrier shell. Xenophora pallidae calcifies free-floating objects in the water to its spine, liberally incorporating foreign bodies into its own structure. Likewise, Xenophoria stages a delirious search for the melanin pigment – the molecule responsible for skin colour – as it manifests variously in both anthropomorphic and non-anthropomorphic bodies. Referencing the aesthetics of both microscopic imagery and ASMR videos, the work depicts such actions as dissecting squids and bursting their ink sacs, tracing the discoloured tumours within Lam Qua’s medical paintings, harvesting funghi, and locating bodily moles, in an absurdist investigation of the substance of racial othering.

Whether working in installation, video or sculpture, these works borrow the body’s hormones and excretions, its fats and pigments, incorporating substances natural or artificial, visible or atomic, named or unnamed in its promiscuous deconstruction of normative categories. To paraphrase the author Rachel C. Lee, my work is invested in magnifying the surreal reality of existing as a biological body in an age where this body is reconceptualised in digital, informational and molecular terms.