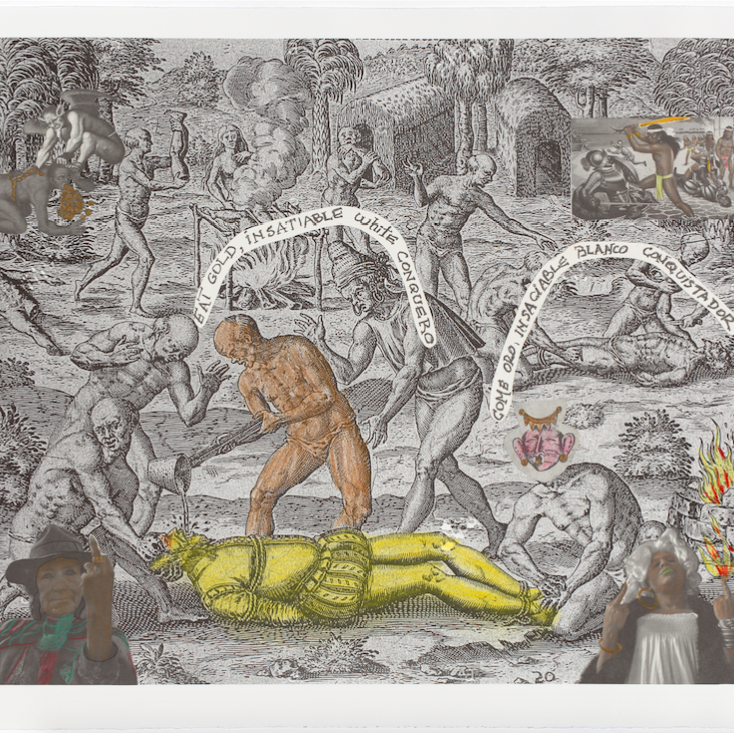 Collective formed 2009 in Madrid, Spain
Lives and works in Madrid

Colectivo Ayllu is a collaborative research and artistic-political action group formed by migrants, people of color, and queer and sexual-gender dissidents from the ex-Spanish colonies. The collective proposes a critique of white supremacy and European colonial heteronormative ideology.

In 1513 the Spanish conqueror Vasco Nuñez de Balbao sent dogs to kill Indigenous sodomites in the town of Caraquea. From that moment, the Spanish empire began the heterosexual colonial project. In 1904, the Mexican police detained sodomites in the centre of Mexico City in the so-called case of the ‘Dance of the Forty-One’. The same happened in 1956 in Asunción, Paraguay, in the ‘108 y 1 quemado’ case. In 1997, a sodomite party in Cuenca, Ecuador, was invaded by police and the participants were detained – a key event in the process of initiating the political activism of sexual dissidents in the country.

The colonial dogs are modern technologies, which produce the systematic death of black and Indigenous sodomites. Colectivo Ayllu’s installation for the 22nd Biennale of Sydney reflects upon these ‘new dogs’ and recovers forms of spiritual and dance resistance that have remained in Abya Yala despite the violence. Through a labyrinthine tour of four stations (‘eat gold!, insatiable white conquero’; ‘our genders are ancestral drifts’; ‘Pachakuti mood’; and ‘Around the world: my body is a checkpoint / my body is a borderline’) this multimedia installation is proposed as an Andean huaca – fundamental Inca sanctuaries, tombs, mummies, sacred places and animals – to act as a critique of Western and heteronormative constructions present in the Spanish colonial project inaugurated in 1492, in which dogs played a fundamental role as a tool of torture and oppression. This repressive project did not end in the colony. The fault is not ours, the blame lies with the white and the Christian.