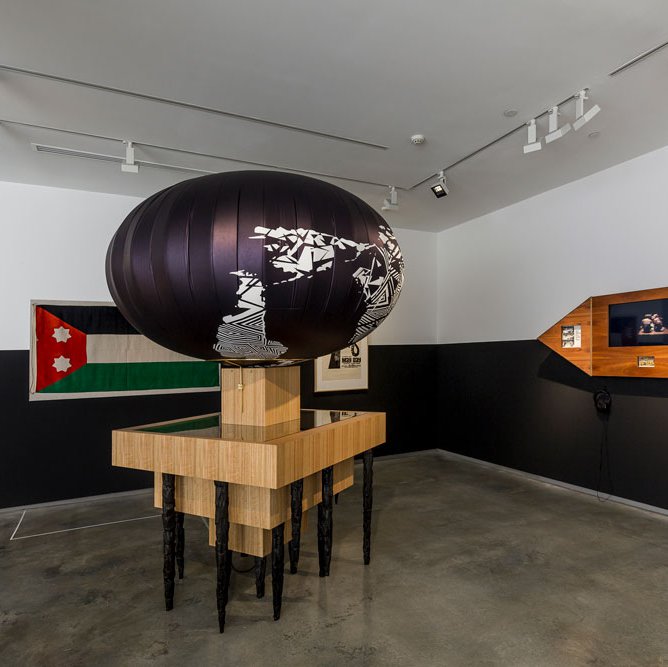 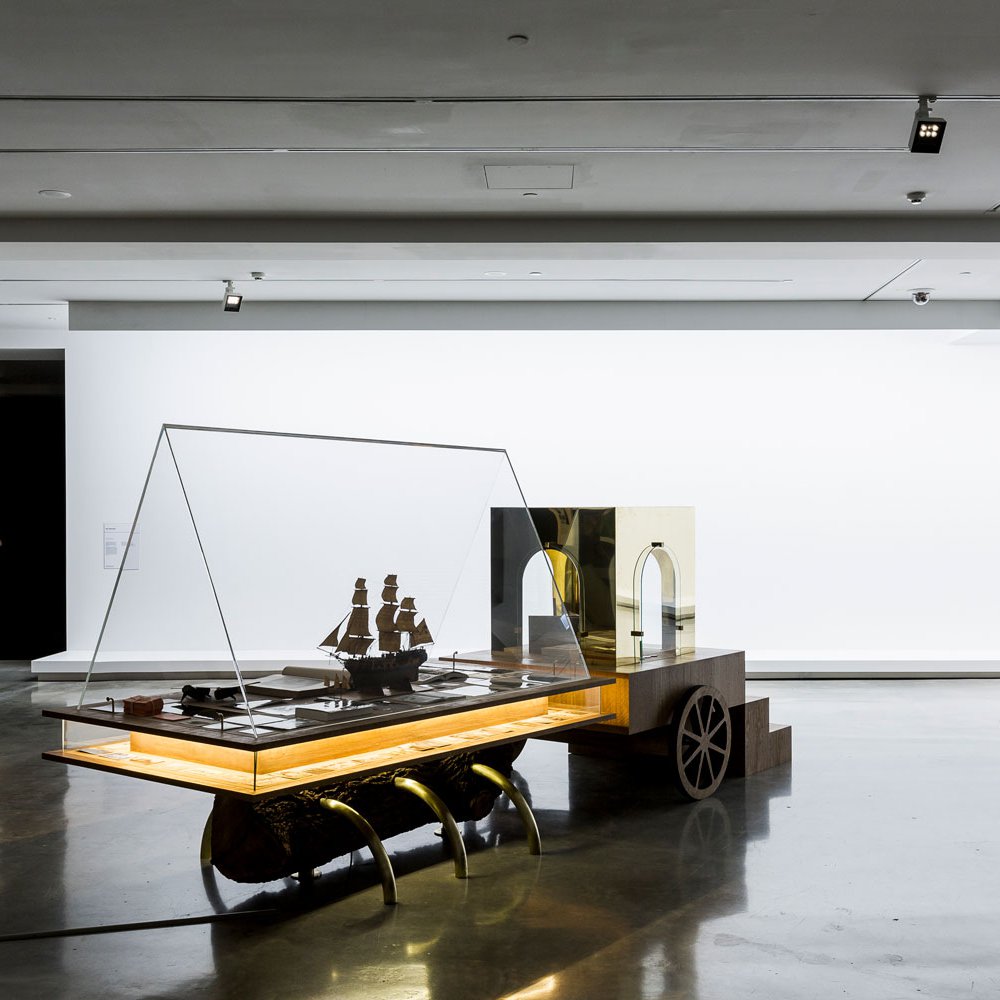 Interdisciplinary artist Brook Andrew creates multi-layered artworks that scrutinise the dominance of Western colonial narratives, deliberately locating Australia at the centre of a global inquisition. Drawing inspiration from archival and vernacular objects, Andrew works with different communities, as well as public and private collections around the world, to highlight alternative histories that are too often neglected, hidden beneath the legacies of colonialism. Andrew provides viewers with new ways to understand the world through intervention and expansion; reinterpreting history and re-framing our inherited experience.

Motivated by research and enquiry, Andrew’s works often have a particular focus on memory, both individual and collective, and the way objects are infused with their own stories. Working closely with museum collections and archives, Andrew investigates the history of objects – which can often be contradictory and controversial – laying them bare for the world to see and asking audiences to rethink accepted ideas and learned inaccuracies. An avid collector, Andrew has amassed a personal compendium of cultural objects, print articles, photographs, postcards and other items that make up the raw material he draws on to create installations and assemblages that aim to throw light on the darkest, most obscure aspects of history.

What’s Left Behind, 2018, comprises five sculptural vitrines that represent the elements of water, air, fire, earth and metal. Andrew has invited four artists to contribute to the installation, asking each person to reflect on the idea of memory and that which is present yet also absent, and the way objects can have transferable and alternate realities and meanings, imbued with their own or substitute histories and stories. The contributing artists, Rushdi Anwar, Shiraz Bayjoo, Mayun Kiki and Vered Snear, have placed a combination of artworks and objects selected from the extensive collection of the Museum of Applied Arts and Sciences, Sydney, within each of Andrew’s sculptural vitrines. Each sculpture represents an individual archive that is part of a collective installation that addresses the complex relationship between objects and the meanings that are attributed to them.

Born in Halabja, Kurdistan
Lives and works in Melbourne, Australia

Rushdi Anwar’s installation, sculpture, painting and video works largely reflect the socio-political issues of Kurdistan, Iraq and the Middle East and are directly informed by personal experiences of genocide, dispossession and political exile. Anwar’s practice examines the human impact of living through conflict and unrest by an investigation of form, materials and processes. As such, his works navigate concepts of change and transformation, as well as generate dialogue around the status of social equity.

Born 1979 in Mauritius
Lives and works in London, England and Indian Ocean region

Shiraz Bayjoo is an artist and filmmaker whose work considers collective identity, nationhood, migration and the legacy of European colonialism through historical photographs and artefacts drawn from personal and public collections. Originally from Mauritius, Bayjoo uses mediums such as painting, photography, sculpture and film to investigate the unique social, political and historical landscape central to Mauritian cultural identity and the wider Indian Ocean region. His interest in archival research, as well as global social and political movements, has informed a series of residencies and community-based projects since 2008.

Born in Asahikawa, Japan
Lives and works in Sapporo, Japan

Mayun Kiki is an Ainu artist, linguist, musician and cultural worker who is interested in cultural continuity and revitalisation. Notably, she has been involved in the revival of women’s traditional tattooing practices, vital to maintaining indigenous traditions and spiritual connections. Kiki is also a member of Marewrew, a musical group working to re-establish and disseminate the ancient Upopo songs of the Ainu people, generating interest in and leading indigenous cultural renewal in Japan.

Vered Snear investigates the role of visual and textual language to explore intricate relationships between media and ideology. Through her conceptual practice, she aims to challenge dominant ideas, examining the use of representation as a tool that articulates subjectivities, affects and desires. Working predominantly in video, installation, photography and sculpture, the artist uses a combination of text and imagery from archives, television, video-sharing and social media that she reworks into fictional scenarios.

Brook Andrew, What’s Left Behind, 2018, mixed-media installation, dimensions variable. Installation view (2018) at the Museum of Contemporary Art Australia for the 21st Biennale of Sydney. Contributing artists: Rushdi Anwar, Shiraz Bayjoo, Mayun Kiki, and Vered Snear. Courtesy the artist; Tolarno Galleries, Melbourne; Roslyn Oxley9 Gallery, Sydney; and Galerie Nathalie Obadia, Paris and Brussels. Presentation at the 21st Biennale of Sydney was made possible with generous support from Penelope Seidler AM and assistance from the Museum of Applied Arts and Sciences.