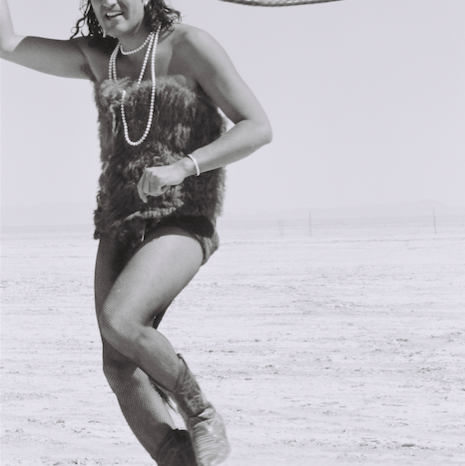 "The colonial world will always see me as the other, the outsider, and the problem needing to be dealt with. However, I am Niitsitapi, a Blackfoot person living in this world today and my centre transcends the colonial project. My centre, like the Blackfoot creator / trickster character Napi, transforms colonial thought by turning its constructed stories and language upon itself, using double entendres, resilience, resistance and most importantly, our survival mechanism of humour."

Adrian Stimson’s ludic characters are presented larger than life and in miniature across works exhibited at Campbelltown Arts Centre, unfolding a fantastical world that re-imagines the fictions, stereotypes and archetypes of both the colonial imagination and Indigenous resistance.

Photographs show early depictions of Buffalo Boy, a parody of Buffalo Bill and fusion of identities including the ‘Indian,’ the cowboy, the shaman, and the Two Spirit being, alongside The Shaman Exterminator, who confronts issues around new-age spirituality and a pan-Indian identity. Buffalo Boy’s Dreamscape is the sculptural counterpart to Stimson’s film, Buffalo Boy Dreams in 4 Directions (which screened at the Museum of Contemporary Art Australia and Cockatoo Island as part of 15 Screens), showing vignettes where characters fight the colonial project.

Adrian Stimson is an interdisciplinary artist who survived the residential school system in Canada. He challenges the colonial project through painting, digital media, installations and performance. He uses the colonial archive, memory, Indigenous knowledge and humour in confronting genocide. His art speaks to resilience and resistance; ways to thrive in an often-hostile world.

Presented at the 22nd Biennale of Sydney with assistance from Canada Council for the Arts and Consulate General of Canada in Sydney
Courtesy the artist and Paul Petro Contemporary Art, Toronto, CA